In the 1970s or early 1980s, I remember reading a horror comic from a rack in a grocery store. I don't even remember the publishing company's name, unfortunately.

It may have been one of several stories in the comic book, but I can't remember.

In the particular story I recall, a man awakens from cryogenic sleep or suspended animation of some sort, to find many other pods of the same type have been opened. The desiccated bodies of the other passengers/crew (I don't know which they were) are crumpled in front of them (the pods are vertical).

It turns out one of the passengers/crew was a vampire and he's been drinking the blood of the people in the other pods until only the central/protagonist character is left.

The vampire and the human have a chase around the ship and there's a self-destruct sequence set off either in the main ship or in the escape pod (but I think the human detonated the main ship and escaped in a shuttle or escape pod). But the vampire is on the same vehicle, and as he's closing in on the surviving human...

...the other vehicle explodes; the light from the explosion casts a sharp-contrast shadow through the view port in the shape of a cross that burns the vampire to ash.

Can anyone help identify the comic?

This appears to be "The Stars, Like Pallbearers" from Secrets of the Haunted House #5. The opening page contains the image you recall of desiccated bodies fallen out of vertical suspension tubes: 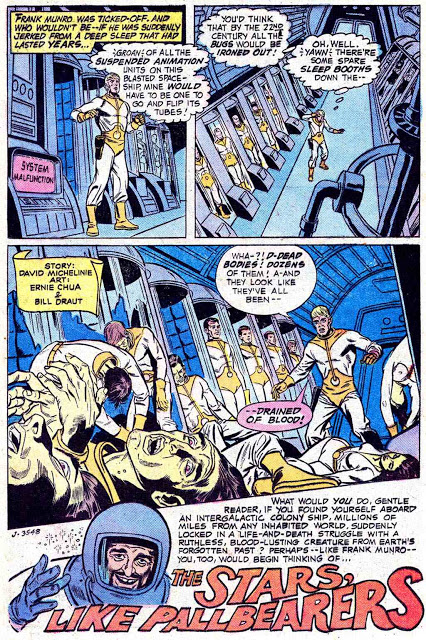 This turns out to be the work of a vampire. The hero tries to destroy the monster by activating the self-destruct sequence of a shuttlecraft in the ship's hangar. But the vampire launches the shuttlecraft away from the ship, where it will explode harmlessly. In the end...

...the other vehicle explodes; the light from the explosion casts a sharp-contrast shadow through the view port in the shape of a cross that burns the vampire to ash. Just like you remembered!

18
What is this story about 20 y.o. inexperienced "kids" fighting against a stronger foe in space?
10
Comic about humans on a starship trying to escape solar system before Sun explodes/goes nova
9
Old SF story about the need to destroy an out-of-control passenger ship with a nuke before it crashes?
10
Short story where astronaut crash lands on Jovian(?) moon, builds "sail wagon" to try to reach help?
10
Trying to identify fix-up about a space war