French folklore: giants trying to raise a ladder into Heaven to overthrow God

Then was revealed La Crau, the bare, the waste,
The rough with stones, the ancient, and the vast,
Whose proud old giants, if the tale be true,
Once dreamed, poor fools, the Almighty to subdue
With but a ladder and their shoulders brave;
But He them 'whelmed in a destroying wave.

Already had the rebels dispossest
The Mount of Victory of his tall crest,
Lifted with lever from its place; and sure
They would have helped it high upon Ventour,
As they had piled the rugged escarpment
They from the Alpine range had earlier rent.

But God his hand extended o'er the plain:
The north-west wind, thunder, and hurricane
He loosed; and these arose like eagles three
From mountain clefts and caverns and the sea,
Wrapped in thick fog, with fury terrible,
And on the marble pile together fell.

Then were the rude Colossi overthrown;
And a dense covering of pudding-stone
Spread o'er La Crau, the desolate, the vast,
The mute, the bare to every stormy blast;
Who wears the hideous garment to this day.

What "tale" and what giants is this referring to? Is it from myth, folklore, or some other author's work? I'm looking for the original source, as far as that's possible, or just more detail about its origin.

Mirèio was written in 1859. La Crau refers to an area in southern France, just east of the Rhône delta. Ventour (Ventor in the original Occitan of the poem) is Mont Ventoux, which is nearby. The Mount of Victory (Santa-Ventùria in the original) refers to Sainte-Victoire, another local mountain.

I can't find anything about giants or ladders related to any of these locations, aside from this poem. The story is obviously similar to the biblical story of the Tower of Babel, and somewhat reminiscent of Jacob's Ladder, but those are the only references I can think of.

There's a reference to La Crau (or rather the plain of La Crau) in the catchily titled 'Remarks on several parts of Europe, relating chiefly to their antiquities and history : collected upon the spot in several tours since the year 1723 and illustrated by upwards of forty copper plates, from original drawings. Vol. 2' by John Durant Breval.

In short, a local tale tells of Hercules coming upon two giants, the sons of Jupiter (Zeus); Albion and Borgion. Hercules fought them until his arrows were spent, at which point Jupiter sent him a shower of rocks which he used to defeat the two giants. There's no specific mention of what they were up to, but building a tower wouldn't be out of the question. 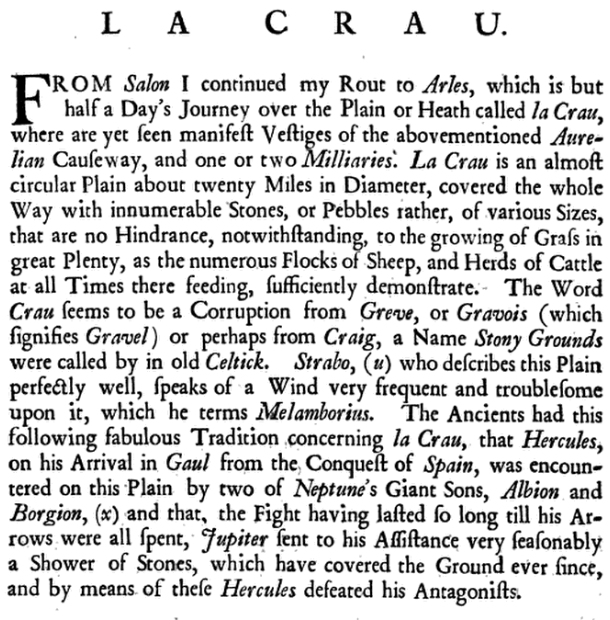 "To leave the island of Eritrea, Heracles again embarks, with the oxen he conquered, on the cup of the sun, then returns after having approached the continent. He continues his journey across the European continent, pushing the flock before him; first he crossed Iberia, then Celtic, where Alesia is a foundation of the hero; in the deserted region of La Crau, east of the Bouches du Rhone, he has to undergo a terrible struggle against the Ligyens; his arrows being exhausted and himself on the verge of fainting with fatigue, Zeus dropped a shower of stones which served him to complete the victory. He crossed the Alps, repulsed in Liguria the attack of two sons of Poseidon, Alébion and Derkymos, who want to rob him of his cows, crosses Tyrrhenia, arrives at Rome, where he triumphs over Cacus, arrives in the region of Cumae, where he supports a fight against the Giants in the Phlegraean fields, builds the causeway that once separated from the sea Lake Avernes and Lucrins. In the vicinity of Rhegium, one of his bulls escapes and drives him in pursuit to Sicily, which is full of his exploits and memories that left his passage. "

It may interest you to learn that this story has changed considerably in the retelling. The earliest reference I can find is from the Geography of Strabo written circa 20 B.C in which he pours scorn on the idea that the rocks were heaven-sent (an account that he attributes to the fanciful imagination of an earlier geographer, Æschylus) and that they were most likely a geological feature relating to the movement of water.

He also mentions an earlier (and presumably more accurate account) of a skirmish that took place on the plain where the attackers used the stones to their advantage, presumably in slings or small siege engines. This may be the root of the story or it may be wholesale an invention of Æschylus, it's not clear.

The whole both of this district and that above it is exposed to the wind, but in this plain the black north, a violent and horrible wind, rages especially: for they say that sometimes the stones are swept and rolled along, and men hurled from their carriages and stripped both of their arms and garments by the force of the tempest. Aristotle tells us that these stones being cast up by the earthquakes designated brastai, and falling on the surface of the earth, roll into the hollow places of the districts; but Posidonius, that the place was formerly a lake, which being congealed during a violent agitation, became divided into numerous stones, like river pebbles or the stones by the sea-shore, which they resemble both as to smoothness, size, and appearance. Such are the causes assigned by these two [writers]; however, neither of their opinions is credible, for these stones could neither have thus accumulated of themselves, nor yet have been formed by congealed moisture, but necessarily from the fragments of large stones shattered by frequent convulsions. Æschylus having, however, learnt of the difficulty of accounting for it, or having been so informed by another, has explained it away as a myth. He makes Prometheus utter the following, whilst directing Hercules the road from the Caucasus to the Hesperides: “‘There you will come to the undaunted army of the Ligurians, where, resistless though you be, sure am I you will not worst them in battle; for it is fated that there your darts shall fail you; nor will you be able to take up a stone from the ground, since the country consists of soft mould; but Jupiter, beholding your distress, will compassionate you, and overshadowing the earth with a cloud, he will cause it to hail round stones, which you hurling against the Ligurian army, will soon put them to flight!’”

Posidonius asks, would it not have been better to have rained down these stones upon the Ligurians themselves, and thus have destroyed them all, than to make Hercules in need of so many stones? As for the number, they were necessary against so vast a multitude; so that in this respect the writer of the myth seems to me deserving of more credit than he who would refute it.

Not the answer you're looking for? Browse other questions tagged story-identification mythology folklore or ask your own question.

13
I am trying to find a story where a children's nursery turns into a jungle
3
Which (possibly French) sci-fi movie features a remote control that turns a basement door into a door to another world?
2
Does the attempted invasion of Midgard by Frost Giants figure into any Nordic myth?
6
Dark scifi featuring AI, “heaven”, and an Egyptian god emulation
11
Trying to find a short story about the ghost of a french officer who woos lady, kills husband
10
Short story about a robot army that fights a war against Satan's army and is lifted into heaven by God
20
In a future war, an old lady is trying to raise a boy but one of the weapons has made everyone deaf