Has The Walking Dead ever done a crossover with another comic?

I have only been a fan of The Walking Dead for roughly two years now, mainly watching the TV series and playing the TellTale Games. However, I am now starting to read the original source material, and have read two (going on three) of the Robert Kirkman and Jay Bonansinga paperback books, along with Volume One: Days Gone Bye.

However, I got to thinking about this the other day, and after doing some research, realized that there were some severely bizarre crossovers that I was unaware of. There was apparently a comic called Archie Meets The Punisher and two books based around Batman meeting the Teenage Mutant Ninja Turtles.

With this is mind, I was just curious, have any of The Walking Dead comics ever done crossovers with other non-Walking-Dead-related material?

There has been no official The Walking Dead crossover with anything else so far. Image Comics' website doesn't list any.

You might know of The Walking Dead: The Alien, which was not exactly written by Robert Kirkman, but still takes place in the main universe. I'm not sure it was approved by Kirkman, but in the afterword of the comic, the writes sounds like they know him, so I think it's got an "official" stamp of sorts.

One could consider the Letter Hacks section (one per issue). I didn't go through all 193 of them (sorry!), but a Google search on the walking dead letter hacks crossover only points to a crossover between the TV show and Fear the Walking Dead - then, not relevant to your question since it's the same universe.

Below is a screenshot of said Letter Hacks (warning: taken from issue #176, so spoilers about the "New world order" arc and some Negan stuff).

And this half of season 8 leads directly into Fear the Walking Dead season 4, which will shake up that show in a majorly cool way. So make sure you hang around for that. 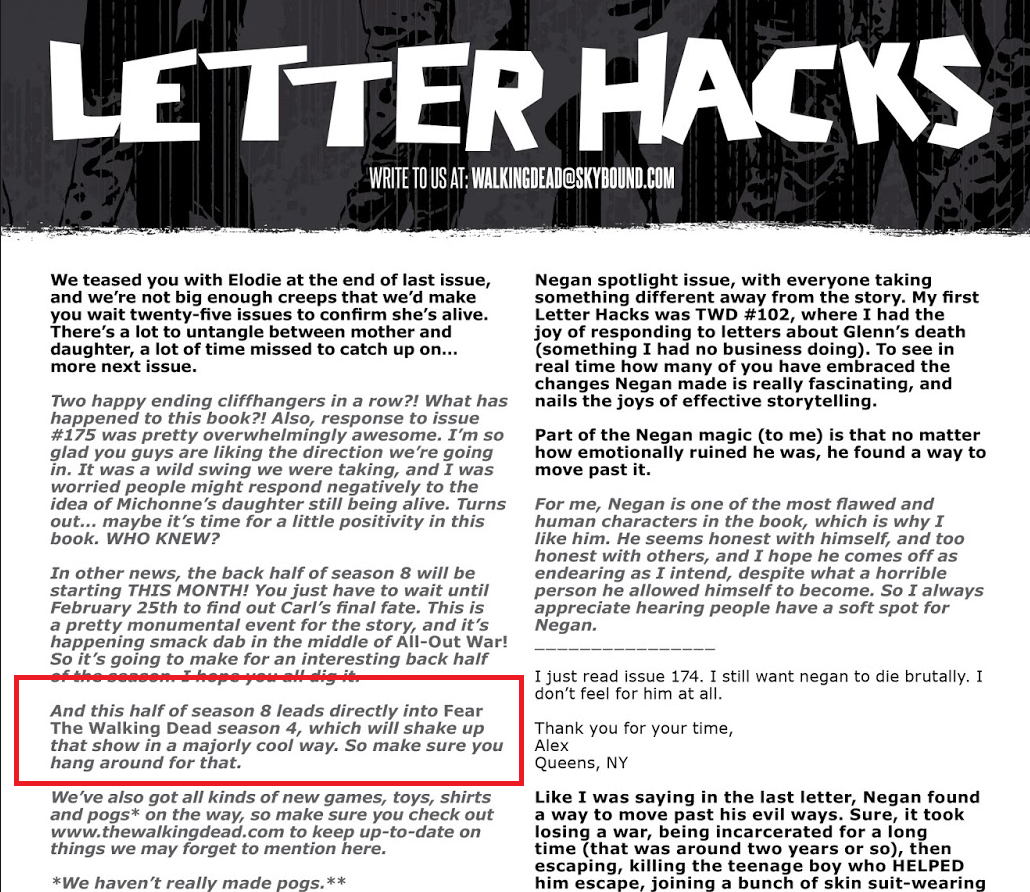 this is pretty much final, given that in an unexpected twist, issue #193 was revealed to be the last issue of the series.

Not the answer you're looking for? Browse other questions tagged comics the-walking-dead or ask your own question.