I can't remember terribly much about the book. I think it was fairly large for a child.

The main character is a teenage girl. She is part of a family/clan who all have very specific superpowers. They range in intensity and specificity, but hers was on the low end. Tattoos could speak to her, and could tell her the inner thoughts of the person to whom they were attached. This worked even with temporary tattoos and ink drawn on skin.

I remember a minor subplot of her dealing with her attraction to a boy that gets drawn into whatever the major conflict is, but has no powers (wrong place/wrong time deal).

The major source of transportation is a yellow ex-school bus that is a main feature of the family. It also appears on the cover.

This is Savvy, by Ingrid Law. 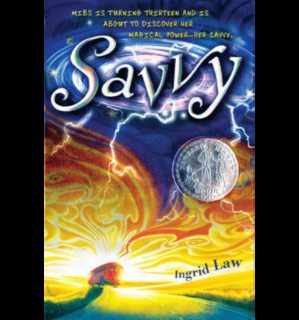 Yes, school bus on the cover.

And the main character has a family with various powers, such as her brother, who can create storms, or her mother, who does mundane tasks (anything from baking a cake to throwing or not throwing a horseshoe) perfectly.

You've got the tattoo power right:

I couldn’t fathom how Bobbi had managed to get a tattoo. I knew that if Miss Rosemary, the woman with direct connections to heaven and the ability to get God Almighty to help her plan my birthday party, if she ever found out, Bobbi might not make it to her own next birthday party, nor up to heaven to get her very own halo either.

That was when that little angel turned its head, twirled its tail, and said, “She’s really very lonely you know …

There are at least two sequels, Scumble and Switch, I believe.

4
Children's book about a talking alien baby (who lives on the moon?)
13
Early 2000's Children's Book With Rhubarb Farm
6
Story about a planet with big sentient animals used as mounts
7
Children's Book - Boy Develops Psychic Powers After Falling in Pond Sludge
17
Identify a stage play about a VR experience in which participants are encouraged to simulate performing horrific activities
4
Animated children's show from the early 2000's - drink turns you into an alien
6
YA Book involving a girl who acquires a book of mystic lore, trapped in alternate world with scarecrows, saved by her mother's watch
6
Novel about a family of psychics involving a longterm plan by the precog to ensure their survival
4
Children's novel: Children create slightly imperfect duplicates, starting with mug