Fantasy anime with blond male who lives with his female senpai

I really want to know the name of this anime that I saw some time ago, but I did not save it in my anime list and now I can't find it.

It had a blond main character. He must do an exam. There is more than one exam, but in one of them they must go over a bridge and I think there was something to do with gold in the dirt. Another exam was in some village, where they must have some money. The main character was helping villagers with changing things with them. The anime had 2 seasons, I think. I am certain that it was about a male, with blond hair to his shoulders and a mark on his face. It was a fantasy anime, and the main character has a female senpai (roughly, an upperclassman who provides guidance) who teaches him how to control his powers. There were some magic items too. One of the exams was in snow. I know that my description is bad, but I only can remember little things.

The blonde main character can use a sword, I think. He lives with his female senpai in a forest, maybe regular trees or maybe bamboo; I really do not know.

I am pretty sure it is the anime called Reikenzan 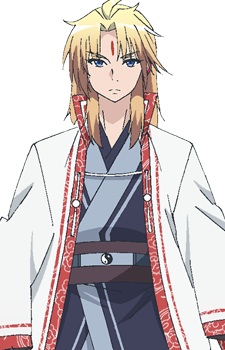 The main character show above fits the description in the question quite perfectly.

am certain that it was about a male, with blond hair to his shoulders and a mark on his face

In the anime he also lives with his senpai, which is girl. All the exams are also fitting to the anime, that's the first season. (It has, as you mentioned, 2 seasons so far)

6
Dystopian anime film where main (female) protagonist is saved from execution
11
A cartoon/anime with a blonde-haired boy with blue eyes and his father(?), they're looking for 7 gems/diamonds
12
Anime with a floating city, a boy and his girlfriend
6
Anime with male protagonist who conceals his red eyes
4
Swords/action/fantasy/magic anime: main character is a bit of a failure, always follows the rules and carries a sword, unlocks his magical ability
28
Gory anime with pink haired girl escaping an asylum
3
Anime about kids using small cars to fight
1
Isekai fantasy manga with a male lead that reincarnates as a child with magic
7
Fantasy anime involving a god named Paladin