I'm looking for a book I read during the last 5 years, I guess, but it could be really old. I read it in French, but it's probably a translation from English (or another language). I thought it was in Down and Out in the Magical Kingdom by Cory Doctorow, but it's not.

It's a sci-fi book set in the near future, where many technologies help Humanity.

One of these inventions is a device (I think it's a sort of watch) that reassures its owner about his actions. The owner can ask: "What would happened if I didn't do something?" and the device says quite every time "You'd be dead", sometimes with details: "You'd be dead, hit by a bus on Main Street". Possibly even absurd deaths, like "You'd be dead, eaten by thousands of koalas" (this is not an actual example).

The device is used to reassure the owner. We don't know if it says the truth, or if it's just for comforting the owner in his actions. Many people have one.

This device is not a part of the plot, just an intriguing detail in this sci-fi world, among others (that I can't remember yet) .

A love story is probably a part of the plot. Some impossible love? Can't remember. I think there was also something involving genetically modified wolves, with a sort of "little red riding hood" vibe at a point of the story (even if the story, as I remember, was set in cities).

Ok, I've finally found it! It was in Lovestar, by Andri Snær Magnason. 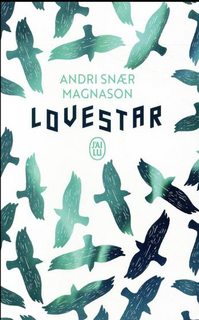 The device I was looking for is called "REGRET". It has no incidence on the story, and now I remember many other services and inventions described in the book. A love story is effectively a big part of the plot. It was a good read, but for some strange reasons I forgot about it.

Not the answer you're looking for? Browse other questions tagged story-identification novel technology or ask your own question.

42
Identifying a story about a girl named Sarah who finds out she is a robot
5
YA time travel book where a family skips forward through time
7
Novel, group transported to a fantasy world, wild/chaos magic
10
Short story about a time machine used for parcel delivery
6
Science fiction novel involving a genetically engineered servant race uplifted from non-human primates
8
2000s (or earlier) novel featuring a fantasy creature with an overwhelming obsession with chocolate
6
Sci-fi book with a deaf/mute main character and implant headphones
24
Novel about a plague that is released in modern times when an early Christian relic is removed from its receptacle