Why are the engineers completely different between movies?

There are dramatic differences in technological aesthetics and anatomy between the engineers across Alien, Prometheus and Covenant. The differences are extreme enough that they do not look like members of the same species.

Among other things (see the attached image for a side-by-side comparison of anatomy), the engineer in Alien is at least twice as large as those in the prequels, does not have legs or any room for legs that are not broken, and is fused with or growing out of the pilot's seat. 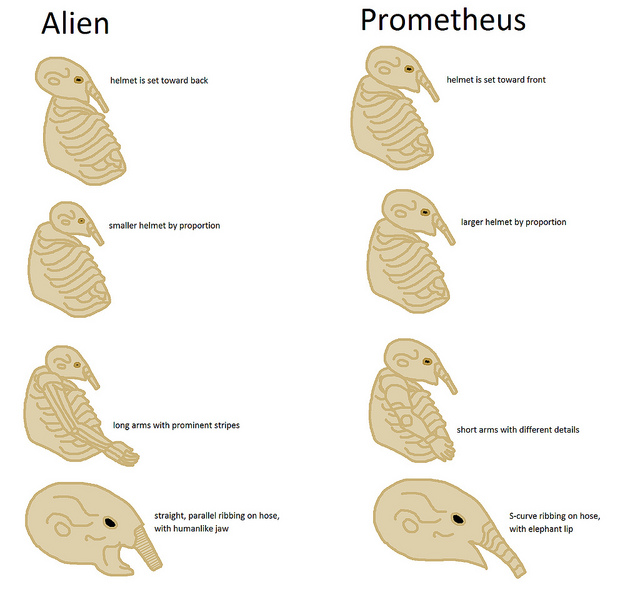 The technology in Alien is biomechanical in nature, resembling a weird cross between industrial machinery and bones and mummified bodies. The technology in Prometheus and Covenant is clearly artificially constructed, but it seems to be aping the aesthetic of Alien. The design of the juggernaut/derelict cockpit is different, as the one in Alien does not seem intended for walking around, since the floor is full of holes and there are no stairs; whereas the one in Prometheus has a flat surface and a convenient staircase.

In Covenant, the engineers bear little physical resemblance to the one from Prometheus. They appear to be a different species, but they use the same technology.

I am aware that in the prequels the engineers are revealed to be humans wearing suits. This is supposed to be a retroactive change applied to the pilot from Alien. That does not explain the obvious disparities in anatomy and technology. I know that these inconsistencies are a result of sloppy production, but I will assume that these differences exist within the fictional universe rather than continuity errors.

This is what the original pilot seat of the derelict ship in Alien looked like: 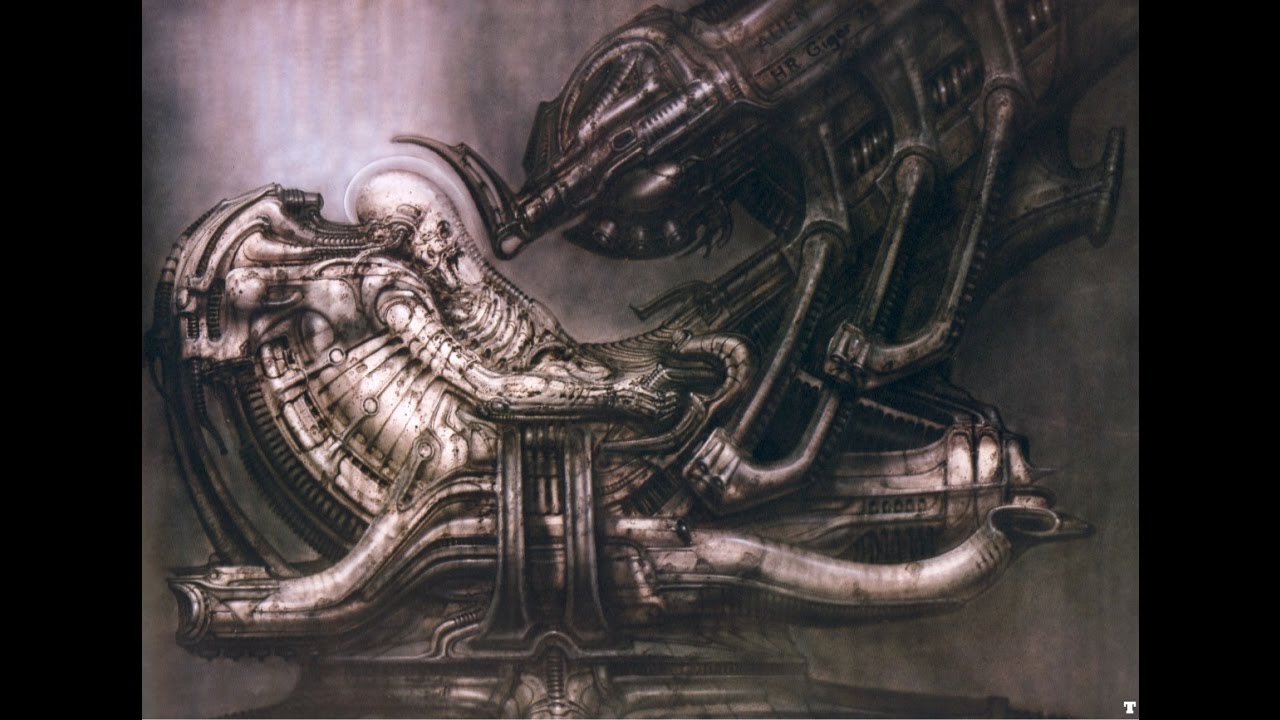 Based on the shape of the suit and the general Giger aesthetic, the pilot in Alien should look something like this: 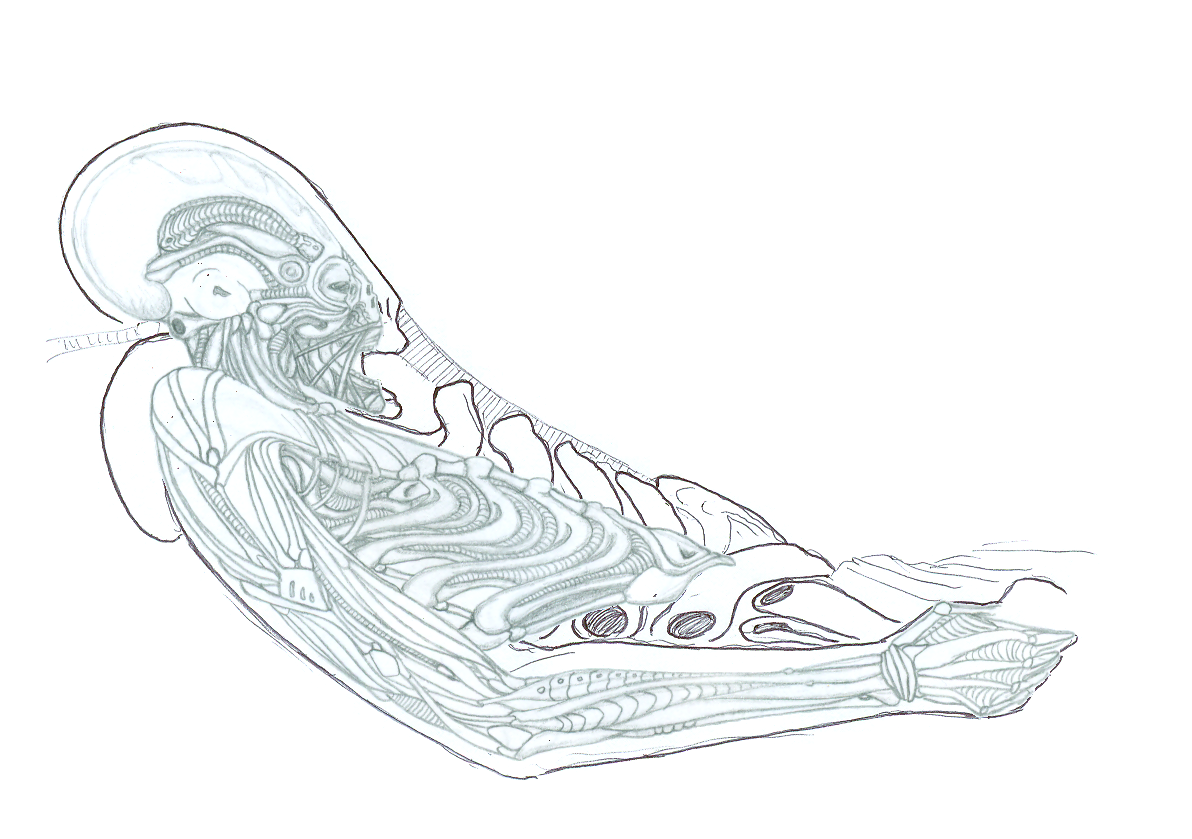 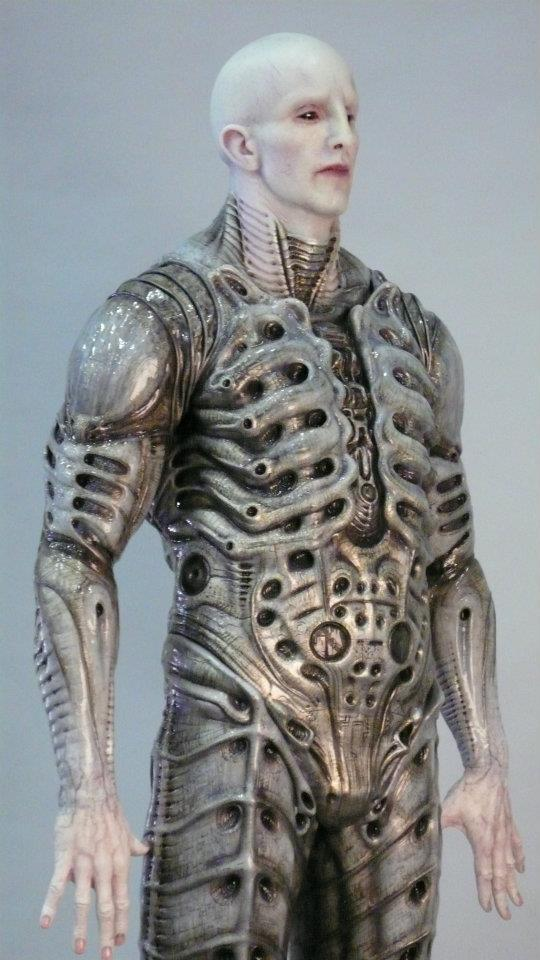 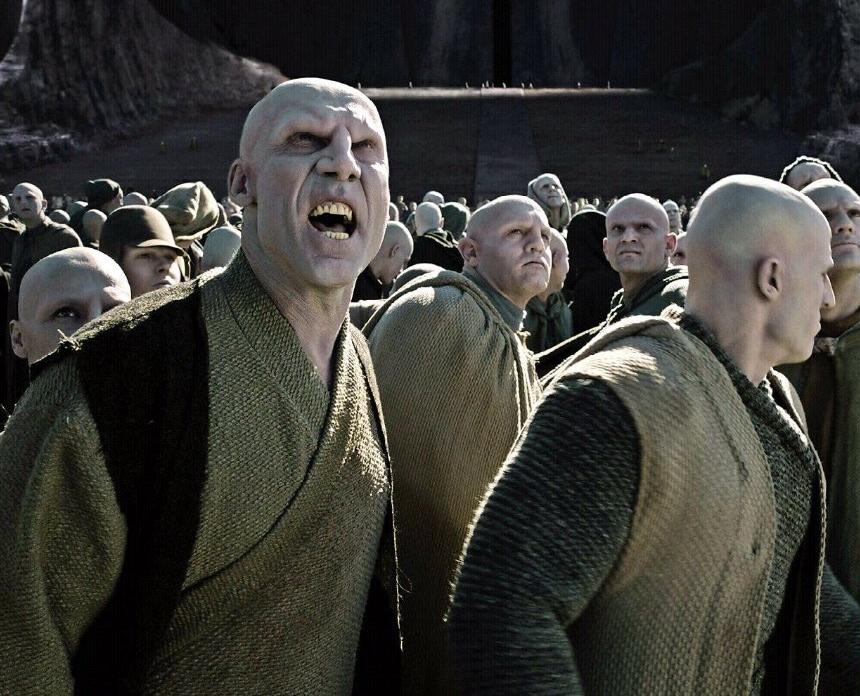 So if you compared an Australian Aboriginal to an Anglo-Saxon from western Europe, would you say they aren't the same species?

There can quite easily be variation within a species, especially if they are advanced enough to breed or modify themselves as they see fit.

Have a look at the first scene in Prometheus where the engineer sacrifices himself with goo, and compare him to the elders standing behind him. That engineer was probably bred to be the perfect specimen, so that the DNA and genes that were left there would have the best effect on populating the planet.

The engineers society (for lack of a better term) had many different variations dependent upon any given function. The 'differences' noted result from this - different buttons, same machine.

I find the varied striations of the engineers society in the film(s) themselves. A certain class to begin the life cycle on any given world, as shown in deleted (but view-able) scenes where taking the parasite was akin to a deeply religious rite.

The innate command arrogance of the one builder we saw in the film, why did only he have access to a viable life support system of the entire crew. Our 'standard' alien resulted from this commander.

The scene in which all of the parasites are released onto the engineers home world, where the crowds resemble a bustling open air market and multiple variations are seen amid the crowds.

Bear in mind also that no one on the engineers home world saw anything unusual in the ships' return (prior to the parasite dump). In the films time line that ship, indeed that entire base in which the majority of the film takes place, had been defunct for several millennia (based upon the 'clues' from earth that brought the humans there.

Given this, it is only logical that the engineers had multiple ships and crews constantly arriving & departing from all over, given that the specific ship that the parasite was dumped from hadn't been 'home' in millennia, yet no alarm was raised at its arrival, rather the crowd rejoiced to see it.

Everything points to a widespread and diverse, far flung society. This diversity almost 'demands' that the engineers were not wholly genocide with the loss of their home world.

Bear in mind too that the original film Alien had an 'undecipherable' signal emanating from the crashed ship, the Engineer deliberately crashing his infected ship on a non viable world and setting a beacon to warn off his people. I know in the latter part of Alien they suddenly decided the signal was a warning to stay away.

Everything thus far in the film franchise, books & games, all point to a diverse culture of engineers.

Not the answer you're looking for? Browse other questions tagged alien-franchise prometheus alien-covenant or ask your own question.

14
What info is available about the Engineers from Prometheus?
58
How did the "black liquid" work in Prometheus?
14
How long is the alternate ending of Prometheus, and is it canon?
6
Why did the astronauts use completely glassed helmets?
6
How/Where did the Yautjas (Predators) get the Xenomorphs?