What planets would I be able to see in the sky I were standing on the battlefield of Hoth?

As the title says, If I were standing in the spot where the battle of Hoth took place in The Empire Strikes Back and I looked upwards, what planets would I be able to see in the sky?

According to The Empire Strikes Back, Hoth was the sixth planet in the system which means that there's the potential for five (or fewer, or possibly more) additional objects in the sky aside from the weak local sun.

“My lord,” the general replied, choosing each word with care, “the fleet has moved out of light-speed. Com-Scan has detected an energy field protecting an area of the sixth planet in the Hoth system. The field is strong enough to deflect any bombardment.”

We also know from the game Star Wars: Uprising that there were two gas giant planets in the Hoth System, one named Jhas and another unnamed one (named as Ordaj in the Legends Essential Atlas). From the ground it seems likely that those would be visible at the very least. 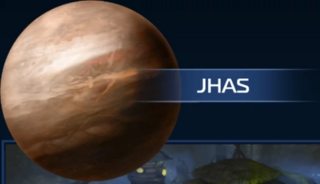 Not the answer you're looking for? Browse other questions tagged star-wars the-empire-strikes-back battle-of-hoth hoth or ask your own question.

52
How did the Millennium Falcon get from Hoth to Bespin without hyperdrive?
25
Why didn't the Empire send other forces in alongside the AT-ATs?
16
AT-ST at the Battle of Hoth in the original version of Episode V?
36
What was in the Star Destroyer Avenger's garbage?
2
Why is there a glimpse of an AT-ST in The Empire Strikes Back?
60
How did Darth Vader know the rebel base was on Hoth?
7
Why didn't the Rebellion use any ion guns to defeat the AT-ATs at the Battle of Hoth, as we saw in Rogue One?
39
What happened to the Rebel soldiers on Hoth?
8
Is Rogue Group/Rogue Squadron named after Rogue One (in-universe)?