How does each bender produce his or her element?

In the Avatar series (both The Last Airbender and Legend of Korra) I noticed that there seems to be a difference in how each bender produces their respective elements. A fire bender seems to be able to call fire at will and bend it. However, water benders are seen primarily bending water that is already near their person. Earth benders definitely can't produce their own earth-like materials in which to bend; they can really only manipulate their surroundings. And of course it seems that air benders simply use the air around them.

So my question is: how does each bender produce their element and how does it differ for each class of bending? For example: Why can a fire bender seem to call forth fire at will yet an earth bender has to use something in their surroundings?

You are correct in that Firebenders are the only Benders who can create their own element. Waterbenders must draw their water from around them, although they can get creative with this: notably, Katara bended with her own sweat, and Hama drew water from plants around her. Earthbenders also must have actual earth present to bend, or metal with a sufficient amount of impurity from the earth. Airbenders also appear to need outside air. Since we have seen no Airbenders in a vacuum, we can't really confirm that, but it makes sense.

Regarding Firebenders, they are able to produce their own flame. Why? For a very long time, Firebenders were taught that their rage and hatred fueled their Fire. When Zuko abandons his anger towards the Avatar and begins to help him, his Fire dissipated pathetically. In the episode "The Firebending Masters," they learned that Firebending isn't just about hatred or outside heat; it is about energy and life force.

Aang: All this time, I thought firebending was destruction. Since I hurt Katara, I've been too afraid and hesitant. But now I know what it really is... it's energy, and life.

Zuko: Yeah. It's like the Sun, but inside of you.

Fire is a manifestation of energy being spent. By focusing their energy, they can create Fire, which is ultimately an expression of energy. The cold can dampen Fire, as can the loss of the Sun's energy. A comet brings even more energy close by to draw from.

Lightningbending, the subset of Firebending, is a true manifestation of control over energy. Zuko was unable to master it because his rage was uncontrolled, as was most Firebenders. Azula was a master at it, just as she was a master of manipulating and controlling her emotions (this can also be seen in her skill at lying, which was undetectable even to Toph) to achieve her desired result. In the episode "Bitter Work," Iroh gives this explanation of Lightningbending:

Iroh: Lightning is a pure expression of firebending, without aggression. It is not fueled by rage or emotion the way other firebending is. Some call lightning the cold-blooded fire. It is precise and deadly, like Azula. To perform the technique requires peace of mind.

Zuko: I see. That's why we're drinking tea: To calm the mind.

In short, Firebenders can produce their own Fire because it comes from within their souls. Whether fueled by energized rage or by focused positive energy, Fire comes from within. Having the ability to balance your energy perfectly unlocks the most powerful Firebending art: Lightningbending.

I'm amazed that a three-year-old question hasn't addressed the most obvious answer to this topic:

Gabe's answer is partially correct, in that the internal state (emotions, discipline, etc) of a Firebender has a great impact on their ability to Firebend. However, we see that this is true with other benders as well: until Aang summoned a certain amount of stubbornness, he couldn't Earthbend, and until Korra learned to "be the leaf," she couldn't Airbend. Firebenders draw their "energy" from within, but only in a meditative, spiritual, and emotional sense.

No bender can create anything, even fire, from nothing. They draw it from their environment.

But without a source, they're powerless.

The power of Firebending, as in the actual energy that is erupting into flame, is dependent on the ambient heat/warmth sources around the bender in question. Firebenders consistently become weaker (or even lose their bending entirely) when cut off from sources of warmth and fire, and they are super-charged when near great sources of heat and energy.

We see this demonstrated again and again, throughout the franchise:

Think about fire, in real life. It's not a single thing. It can be different colors based on what's burning, radically different temperatures, or even completely invisible (such as Hydrogen fires). Embers can radiate plenty of heat to burn you, without any visible fire coming from it. A flame is simply what happens when the heat grows intense enough in one spot that matter and particulates in the air begin to glow.

Fire is a function of the concentration of heat.

Perhaps a more accurate name for Firebenders would be "warmth-benders" or "heat-benders", but ultimately they work just like the other three nations: they move and gather their element. In the case of Firebenders, they gather ambient heat, and usually produce the effect of erupting flames in the process.

But they're not generating flames, so much as they are bending heat, which tends to produce visible flames as a side-effect.

In fact, Waterbenders can work the same way.

Generally, when we see benders work, they are moving visible quantities of an element from one place to another. But there is another example of someone "producing" their element, seemingly out of nothing: Hama the Bloodbender demonstrates the ability to pull water from any living thing, gathering a substantial (and deadly) amount of water from a field of flowers. 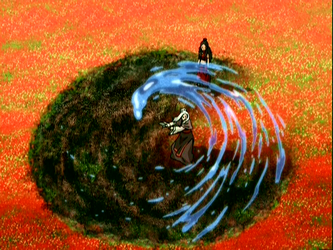 This is the perfect illustration of Firebending: just as Hama isn't "creating" water, she's simply gathering small amounts together from across a wide area, so Firebenders can't "create" fire, they simply gather the ambient heat around them and concentrate it.

But without even those minor sources of water, Hama is powerless, just like P'Li was powerless in her ice prison.

This idea, of Firebenders "breaking the rules" by creating fire instead of bending it, was one of the things that M Night Shyamalan changed in his ill-fated movie adaptation The Last Airbender.

In that film, Firebenders are generally only shown bending fire from something, like a nearby campfire. When Iroh demonstrates the ability to actually create fire, seemingly from nothing, the nearby soldiers react with amazement. 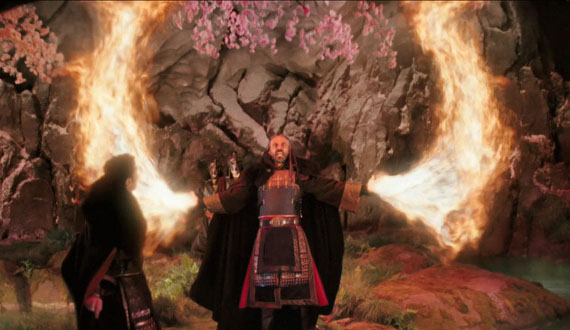 But, as in so many other ways, M Night had misunderstood his source material: Firebenders don't create heat, they bend it, and in the process they make fire.

Firebenders draw their power from heat, and in worst case can use the heat of nearby living objects -- including themselves -- as the source of their bending arts. This is, obviously, not ideal, as seen in the episode w/ Zuko in the ice cave, where his body temperature dropping affected his bending ability.

In general, though, the firebenders draw power from solar objects that give off heat and light -- including the sun, moon, and comets. As long as there is any source of heat around, the firebender can bend it into actual flames (or lightning). Again, note that Zuko, in a cave without access to direct sunlight, was hampered in his bending ability.

Speculating on why firebending appears unique in this regard:

So far, we have not seen any other bender art use their own internal resources to fuel their arts (though, as mentioned in the comments, Katara came close). Given that the human body is mostly water and air, it would seem like a logical step. However, we should also consider that the human body naturally radiates heat, so it may be "safer" to use up your internal heat reserves -- which will replenish -- than drain your body of fluids or your lungs of air.

The reason that fire benders can produce fire is because the release an exeptional amount of heat when they bend. The heat + surrounding air = fire.

Fire Benders draw their power from any surrounding fire, very few can use their Chi to generate their own fire,

Water Benders control water anywhere around them, including moisture in the air or as in the series, in people's bodies.

Air Benders obviously are surrounded by their element Air and can in theory remove air from a persons lungs.

Earth Benders can control the earth beneath their feet, Toph also learnt to bend metal which is not normal unless there was enough impurities in it, Toph actually beat this restriction.

obviously all benders are affected by certain earthly and heavenly bodies, Waterbenders are affected by the moon as the moon causes tides and therefore affects water, Firebenders are weaker during an eclipse as the sun - a source of fire is reduced, and the comet being a flaming ball, promotes the firebending ability, There is no mention of the affecting source of airbending though. maybe during hurricane season they are stronger? who knows.

17
How did Fire Lord Sozin seemingly bend (or even absorb) smoke?
4
Is lightning redirection a Firebender-only skill?

7
Why aren't there any airbenders in Profession Tournament Bending?
12
Would it be possible for some to bend two elements?
10
How does the water tribe use water to heal?
7
Why are benders (generally) designated to specific areas?
12
How can Wan's history be reconciled with legend?
20
How does Lava Bending work?
15
In the Avatar world, what exactly are they bending?
9
How would people set up a prison for an air bender?
2
How come Korra could bend three elements so young before training?
8
How were people first born with bending abilities?