YA book series about a teenage dragon

I'm looking for a teenage/young adult book series about a teenage girl who finds out that one of her parents is a dragon, and I think the other one might be a dragon hunter or from some other sort of rival group. I'm pretty sure the main character has a very typical white girl name (Jennifer or Jessica?). I read the first book in the early 2000s, maybe around 2008, but there were already a few books at this point so they were probably released in the late 90s or early 2000s in English. They definitely weren't mainstream but I think they were relatively popular, I had a few friends that read them too. They were definitely aimed at a teenage female audience but I read them as a 12 year old boy or so and enjoyed them quite a bit.

The only specific scene I remember is when the main character had her first "big" confrontation (I think at the end of the first book), and her best friend, who's just a normal person, ends up driving in and saving her (I think she ran the evil guy over), and one of them makes a comment about how her friend only has a learner's permit and shouldn't be driving. I think her best friend was the only normal person who knew she was a half-dragon? I also seem to remember that her one non-dragon parent lived on some weird farm, and I think that's where she did a lot of her training and learned more about the dragons.

I've looked at basically every list of YA dragon books I could find, I've looked up things that I remember as possible titles (Jennifer Scales is really sticking in my head but that doesn't exist), and I've looked at other Story-Identification questions here with no luck so far.

As noted in the comment above, this may be MaryJanice Davidson's and Anthony Alongi's Jennifer Scales series. The first book, Jennifer Scales and the Ancient Furnace was published in 2005, which would fit your timeframe. Here is its synopsis:

She knew that growing up would mean changing. But Jennifer wasn't prepared for the blue scales or the claws, since no one had told her that she came from a bloodline of weredragons. Her greatest challenge? Protecting herself from her family's ancient enemies and preparing herself for fierce battles. And that's a lot to expect of a girl just coming into her own.

And here is the 2007 release cover (it's more distinctive. You can find other covers by clicking on the link above, hovering over the cover image, and selecting Other Editions): 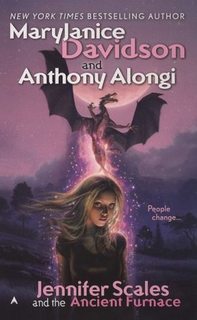 The reviews on Goodreads mention that her mother is not a weredragon. She trains on her grandfather's farm. Susan is her best friend. Skip is the new boy in her class who she likes.

Apparently the twist in the tale is that:

the antagonist is Skip's father, explaining why he was not surprised when she told her friends she was a were-dragon.

I found a copy of the book on my hard-drive and her mother is a Beaststalker, which is kind of like a monster hunter. No reference that I can find of the evil guy getting run over.

Not the answer you're looking for? Browse other questions tagged story-identification books young-adult dragons or ask your own question.

7
Trilogy about a girl, dragons and Nicholas Flamel
8
Trilogy of books about dragon souls inhabiting humans normally warriors
9
Young Adult Story about girl with electric powers
4
Book about the reincarnated spirit of a daughter of Apollo
6
Kids Book series - Girl babysits a family of monsters
4
An older fantasy book about a primitive girl who lived with dragons