As the title says, this would have been pre-1990. A short story in which a space probe from Earth, presumably NASA, lands on a world like Titan and is found by a female member of the local species. I seem to recall some back and forth with her curiously examining the probe and the Earth control crew curiously examining her, and ultimately the probe is enlisted to help her oppose what I think was her sister who was some sort of tyrant? I also seem to recall that the probe had some sort of powerful electric defense mechanism that came into play.

This is Eyes of Amber by Joan D. Vinge.

It got the cover for its magazine appearance. It's actually the probe's camera that has the "amber eyes" which makes me wonder how closely the artist read the story. The indigenous person does have wings though, so the artist got that right. 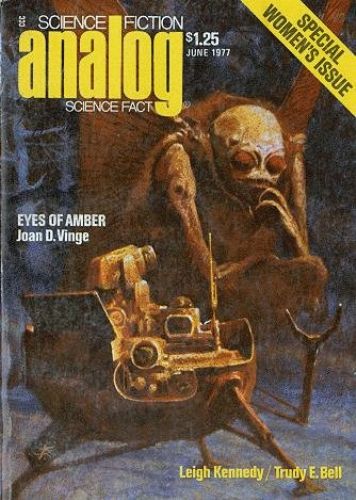 It also won the Hugo Award, so it was in the Hugo anthologies that used to come out back then. It was also in at least one of the "year's best" anthologies, which is where I first read it.

The society on Titan is similar to Earth's medieval time period. The indigenous person is involved in a struggle for position that she was unfairly removed from.

10
Looking For A Groovy Story I Read As A Child