Which Sci-Fi work first showed romance between a human and an android?

Here, by android, I mean "an AI robot which looks and acts like a human." It shouldn't just be "Sex Robot". Emotions between both parties need to be involved.

At this time, there are two examples in my mind:

Which Sci-Fi work first showed a romantic relationship between a human and an android?

Two young men, a mechanic, Dave, and a medical student, Phil, collaborate on modifying a household robot, originally meant only to cook and clean. They are more successful than they intended; despite the robot's household programming, it develops emotions. The robot, named "Helen O'Loy", falls in love with Dave. Dave initially avoids her and rejects her advances, but after some time he marries her and they live together on his farm.

Over the years Phil assists her in artificially aging her features to match the changes that occur in her human husband. When Dave inevitably dies, she sends a letter to Phil asking him to dissolve her metallic structure and bury her remains with her husband. She begs him not to let anyone discover their secret. In the final line it is revealed that Phil, who had been narrating the story, had secretly been in love with her the whole time. 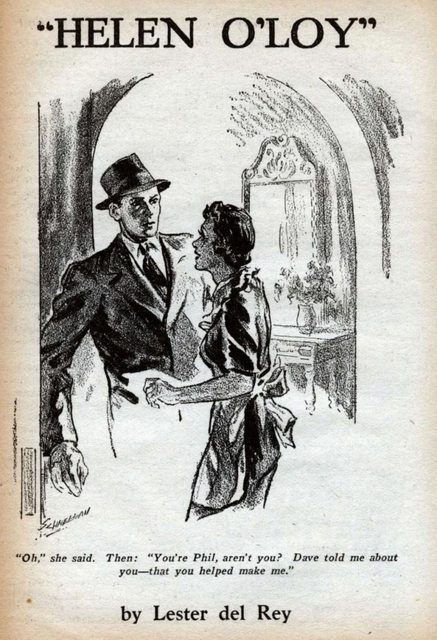 I list this because it strongly hints at the potential of human/android love, even if it never gets there. The movie would be Metropolis (1927).

The movie largely turns on a robot that is made to look like a woman. We see these two points

Rotwang had been in love with a woman named Hel, who left him to marry Fredersen and later died giving birth to Freder. Rotwang shows Fredersen a robot he has built to "resurrect" Hel.

Freder believes that he could fill the role and declares his love for Maria. Fredersen orders Rotwang to give Maria's likeness to the robot so that it can ruin her reputation among the workers to prevent any rebellion.

It doesn't entirely fit because the romance avenue is never fully explored as part of the story (we never see the robot reciprocate love). However, we see that the robot is made to look and act identical to an actual woman (including emotions). There's every indication that Rotwang, the robot's creator, intended to carry on a relationship with the robot (at one point Rotwang even confuses the woman, whose likeness he had given the robot, for his dead wife and kidnaps her). Given that the robot fools multiple people into thinking she is a real woman, there's no reason to believe a relationship would not be possible.

Upon opening the special container, Corry discovers that Allenby has left him with a feminine robot named Alicia to keep him company. Alicia is capable of emotions, memory and has a lifespan comparable to a human.

Over the next 11 months, Corry begins to fall in love with her. Alicia develops a personality that mirrors Corry's, and the days become bearable.

Wikipedia doesn't explicitly say Alicia loved Corry, but I've seen the episode, and it is clear she cares for him as well:

The robot breaks down, malfunctioning, its face a mass of wire and broken circuitry which repeats the word "Corry".

Since the OP ask for which work first "showed romance between a human and an android," I assume that he meant a TV show or movie.

Kirk fell in love with a woman who didn't realize that she was an android.

Rayna comes to say goodbye to Kirk, who has fallen in love with her and begs her to accompany him. McCoy tells them that the ryetalyn is missing, and Spock follows tricorder readings to a laboratory chamber containing android bodies, all labeled "Rayna".

Flint finally reveals the truth... Rayna is to be his mate, now that Kirk has taught her how to love... A fight then breaks out between the two men for the possession of Rayna. Rayna stops them, claiming her right to choose her own future, and then, overwhelmed by her newfound emotions, dies. 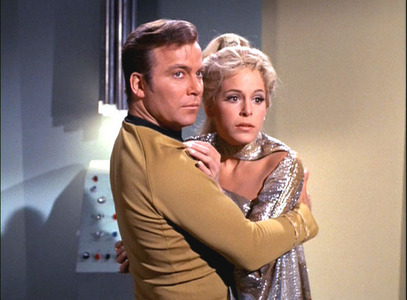 Kirk also showed the hots for a couple of Harvey Mudd's android women but I don't think that was love.

Not the answer you're looking for? Browse other questions tagged history-of androids or ask your own question.