I read this story in approximately 1979 (plus or minus a year); I found it in an anthology when I was systematically reading my way through all the SF in my library's YA section. Note that the book may have been much older; at the same time I read "A Treasury of Great Science Fiction" (both volumes), and those were published in 1959/60.

I'm 95% sure that the story takes place on Mars. A young man or youth, because of some accident or misfortune, (perhaps his vehicle crashed) is stranded alone and forced to try to walk to safety. It is part of the story that he is not as strong as most people; not that he is disabled, just that he is not as strong or as fast. It becomes important because his walk is one that a "normal" person would have been able to make, but he isn't able to move fast enough to get to safety before his air runs out.

He runs out of air, and rather than suffocate in his suit, he opens his helmet. And it turns out that he can breathe the atmosphere.

"The Air of Mars" (1970) by Dmitri Bilenkin. Its only English publication was in The Air of Mars and Other Stories of Time and Space (1976) edited (and translated) by Mirra Ginsburg. 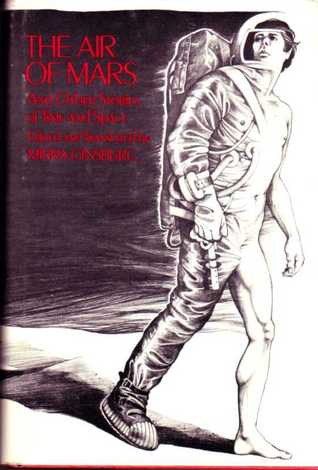 A young man or youth, because of some accident or misfortune, (perhaps his vehicle crashed) is stranded alone and forced to try to walk to safety.

He walked across the cold, red plain for two days and two nights--forward, only forward. He wore a clearly visible bright blue space suit, but he did not delude himself with the hope that he would be found by his comrades. It would be a sheer miracle if the hum of a motor broke into the monotonous howl of Martian air.

The other boys treated him with tolerant condescension, as a weakling, and the gym teachers detested him. The doctors had diagnosed the boy as "healthy." He had a normal body and normal limbs. What right had he to frustrate and humiliate them, hanging on the rope like a sack of potatoes? Gym classes were the nightmare of Severgin's childhood and adolescence.

The end of the story:

He jumped up. And was breathless. As though a mask were pressed against his lips. Yet still he went on. His lungs rose and fell, faster, faster. They were convulsing with pain. A rattle came from his constricted throat. He dropped down to his knees but still crawled forward. And when his mind turned blank and his body thrashed about in agony, he tore off his helmet and gulped the Martian wind as a drowning man gulps water, because he cannot help but gulp it.

A chill passed through his lungs, a last intolerable flash of pain, and everything went black.

Everything went black, only to start glimmering again. He came to slowly from the convulsions that had seemed to tear his lungs apart and saw something wavering and red before his eyes.

With an incredible effort he raised his head. It was already light. And he was crawling! He was breathing Martian air! His organism was different from others⁠—he survived!

He did not even realize this. He did not think. He continued to crawl, fiercely, stubbornly, no longer obeying reason, but moved by pure instinct, on and on, toward the place where there were people.

Could this be 'Keep Out' by Fredric Brown? This is a short story about how the children of Earth become the first Martians. They look - and think - a little different from Earth-born youngsters but after some generations they are able to breathe the Martian Air. You can listen to it at Librivox at the Internet Archive. Librivox has an enormous collection of short SF stories.

This could be "At the Bottom of a Hole" by Larry Niven. It appeared in Galaxy in December 1966 and later in the 1973 anthology Inconstant Moon. But I read it in the 1975 anthology Tales of Known Space: The Universe of Larry Niven.

I know why they call them Flatlanders now. I feel like a gnat on a table.

The story recounts the log of Muller, a Belter smuggler who crashlanded on Mars in an attempt to slingshot around the planet.

Because he is a Belter who grew up in zero-G, even Mars's weak gravity is a strain on him. He later finds the ruins of Earth's first colony on Mars. He patches the dome, which has holes slashed in it,

by Martians, whom nobody believed existed,

reinflates the dome, and takes his suit off in the breathable air.

But the Martians come back.

Another suggestion: Frederik Pohl's Man Plus.

Story featuring a single person (actually a cyborg, i.e. someone who is both human and machine) who, uniquely, is able to breathe - and more - on Mars. Also, published at the right time (1976).

14
Help identify short story - Astronaut stranded on Mars
19
Mars 'troffie' short story
9
Identify a short story where a paraplegic man travels back in time to save his wife but doesn't get the result he wants
13
Short story about a man who runs into his wife from the past?