I saw this around 7-8 years ago on Toonami/Cartoon Network and I'm still not quite sure it was an anime or an animated TV show.
I watched this series completely in Spanish since that's my main language but sadly I was too young to remember anything else about the animation style or quotes from it.
The opening is the thing I'm less sure of but it basically recapped the story, and it was something like...

I remember 3 episodes, to an extent,

Sounds like Deltora Quest. There was a previous question about it: Cartoon Network show. Monster hunting. Dark theme. Monsters looked to be done by CGI

This sounds extremely similar to Ronin Warriors/Legendary Armor Samurai Troopers. It was aired on Toonami, and it has roughly the plot you described: a very bad fellow from the past is vanquished by an ancient hero and his armor is split into pieces and sent around the globe for safekeeping. Big bad returns in the modern era and seeks his armor, but 5 young warriors stand in his way and anime things ensue:

Long before Talpa came to conquer Tokyo in modern times, a mystic known as The Ancient One defeated Talpa in battle. The mystic sent Talpa's soul to the Underworld, but the warlord's demonic armor remained in the mortal world. As a precaution against Talpa's possible return, The Ancient One melted down the armor, then remade it into nine separate armors. Five of these armors found their way to the Ronin Warriors; the other four ended up with Talpa's Warlords.

There is an episode with a lake. There is a castle in the sky. 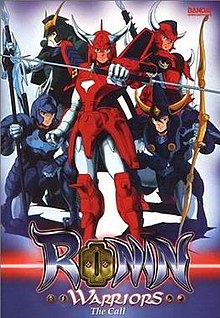 There is also the Toonami Wiki entry.

There is a lot of info out there on the web that should help you confirm/deny/rage at the heavens that this is your series. You can also watch the whole series on Crunchyroll.

5
Looking for a story with water/earth/fire as rock/paper/scissors
7
Anime about people turning into square-like, stone robots
4
Old anime show with pirate, princess, and boy
5
Book about three companions forced to solve puzzles to find gems
10
Anime about a red haired boy suddenly being transported into another world
10
Sci-Fi/Fantasy Anime about a girl who turns into a world-destroyer
3
Toonami anime about a boy with a sword and a girl with weird Uzis
7
A 80s-90s anime/cartoon where MC carries a sword in which can place different gems that grant different powers