Do we know the whereabouts of any of Rhaegar's rubies?

Prince Rhaegar Targaryen lost to Robert Baratheon in a famous battle on the Trident. After which, that crossing became known as Ruby Ford for the rubies that were knocked off Rhaegar's armor.

There's a crazy fan theory that Rhaegar didn't actually die, that the rubies were magic (think Melisandre), and that the fighter who died was "glamoured" to appear to be Rhaegar.

We know that Arya wanted to go (went?) ruby hunting when their caravan passed the Ruby Ford in the first book, so I imagine lots of people have done some treasure hunting. Plus, of course, fighters on both sides "scrabbled" for the rubies as they fell.

Have we seen any rubies purported to be from Rheagar's armor in any of the books, including companion books to ASOIAF?

Credit @TheLethalCarrot for reminding me of "scrabbled", I loved that usage when I first read the passage.

Six rubies washed up on the shores of The Quiet Isle in the Trident well after the battle. Those rubies may very well be from Rhaegar's armor. 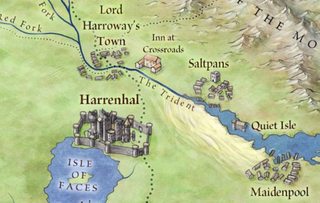 The septry stood upon an upthrust island half a mile from the shore, where the wide mouth of the Trident widened further still to kiss the Bay of Crabs. [...]

The cups were carved from driftwood too, no two the same. When Brienne complimented them, he said, “My lady is too kind. All we do is cut and polish the wood. We are blessed here. Where the river meets the bay, the currents and the tides wrestle one against the other, and many strange and wondrous things are pushed toward us, to wash up on our shores. Driftwood is the least of it. We have found silver cups and iron pots, sacks of wool and bolts of silk, rusted helms and shining swords … aye, and rubies.” That interested Ser Hyle. “Rhaegar’s rubies?” “It may be. Who can say? The battle was long leagues from here, but the river is tireless and patient. Six have been found. We are all waiting for the seventh.”

So, we can't know for sure that these rubies are Rhaegar's, but it does seem to be a pretty good bet.

According to @delinear in comments: "There's a theory that the rubies the brothers talk about washing up on the shores are metaphorical and represent the 7 who kidnapped Lyanna (Rhaegar was said to have been accompanied by six others) and that the missing ruby they're still waiting to discover the whereabouts of is therefore possibly Jon Connington."

I haven’t had the time to have a full look through the books to find any reference to those rubies. However, the first mention of them from Ned’s POV is very telling.

They had come together at the ford of the Trident while the battle crashed around them, Robert with his warhammer and his great antlered helm, the Targaryen prince armored all in black. On his breastplate was the three-headed dragon of his House, wrought all in rubies that flashed like fire in the sunlight. The waters of the Trident ran red around the hooves of their destriers as they circled and clashed, again and again, until at last a crushing blow from Robert's hammer stove in the dragon and the chest beneath it. When Ned had finally come on the scene, Rhaegar lay dead in the stream, while men of both armies scrabbled in the swirling waters for rubies knocked free of his armor.

A Game of Thrones, Eddard I

Firstly, it mentions lots of people trying to get their hands on one so the rubies are likely spread around Westeros having been used to make the owners rich. It also mentions the rubies were knocked free of the armour and Ned could still see it was Rhaegar. If most of the rubies had come off it would be likely any glamour would have failed.

Maester Yandel also makes mention of similar events in The World of Ice and Fire.

The battle screamed about Lord Robert and Prince Rhaegar both, and by the will of the gods, or by chance—or perhaps by design—they met amidst the shallows of the ford. The two knights fought valiantly upon their destriers, according to all accounts. For despite his crimes, Prince Rhaegar was no coward. Lord Robert was wounded by the dragon prince in the combat, yet in the end, Baratheon's ferocious strength and his thirst to avenge the shame brought upon his stolen betrothed proved the greater. His warhammer found its mark, and Robert drove the spike through Rhaegar's chest, scattering the costly rubies that blazed upon the prince's breastplate.

Some men on both sides stopped fighting at once, leaping instead into the river to recover the precious stones. And a general rout quickly began as the royalists started fleeing the field.

The World of Ice and Fire, The Fall of the Dragons: Robert’s Rebellion

This related Q/A also mentions that Rhaegar was cremated. It is, however, from a semi canon source so might not necessarily prove your theory wrong.

Lastly, it is worth pointing out that the story is ultimately about Jon and Dany. Having Rhaegar still alive kind of diminishes that. It would also further complicate things with regards to Aegon.

4
What became of Rhaegar's corpse after Robert killed him?

12
Does the Kindly Man know Arya's secret?
7
The known whereabouts of Littlefinger
13
What do we know about the Others' ice spiders?
14
What do we know about Bran the Builder?
8
Does the North know that Ramsay did not marry Arya?
11
Did Lyanna Stark know about the sack of King's Landing and the death of Rhaegar's children?
8
Do the Tyrells know (or suspect) where Sansa is?
14
Is Rhaegar's son, Aegon, alive?
0
Do any lords of the Northern Houses know this character returned from the dead?
4
What became of Rhaegar's corpse after Robert killed him?