I only read the first book in the series and that was about ~8-10 years ago. It was in English.

Part of the plot is the fact that no one else saw the particles act strangely, and it's seen as her fault she fell. I think there's also a bit where someone from the government/council throws some thinly veiled threats at the woman about this.

Not being able to see the coloured particles is seen as a lower class thing, but people who can see the brown particles are given a job to clean them up by using a special silver suit. She is fitted with this silver suit which is inside her maybe, or comes out of bracelets, or something like that. Either way, the suit helps with cleaning up the brown particles which are a problem somehow.

Of course there's a romance plot where she falls in love with the guy training her on how to use the suit to clean up the brown particles.

I also remember there's something about how almost everyone has forgotten how the silver suit works, but she begins to figure it out. Things like everyone else has to stop and project a map of the city when they're running around, but she figures out there are bumps and grooves on the bracelet that represent obstacles and the like.

Hopefully that makes sense and someone knows what this book is. I haven't had much luck googling it.

The book was Debris by Jo Anderton, the first book in the The Veiled Worlds series.

Tanyana is among the highest ranking in her far-future society—a skilled pionner, able to use a mixture of ritual and innate talent to manipulate the particles that hold all matter together. But an accident brings her life crashing down around her ears. She is cast down amongst the lowest of the low, little more than a garbage collector.

Who did this to her, and for what sinister purpose? Her quest to find out will take her to parts of the city she never knew existed, and open the door to a world she could never have imagined. 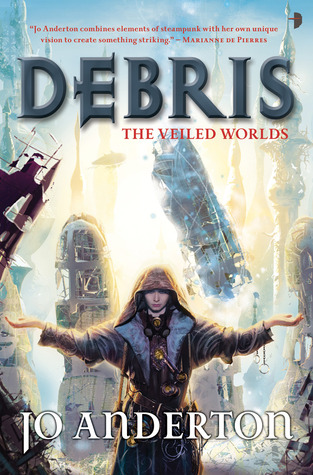