Old children's film or tv special where man has a magic bucket of paint?

This one is going to be a real longshot, I fear. I can really remember only one scene from the film or tv special, and not sure of the context of it. Anyway, here we go.

The film is some sort of children's movie with elements of fantasy. Might be a musical or a comedy in nature. I do seem to remember it being fairly light fare in any case. The part I remember best is that there is an adult male character who has a somewhat magical bucket of paint. As a kid, I was certain that the part was played by Dick Van Dyke. My first thought was either Mary Poppins or Chitty Chitty Bang Bang. After doing some googling though, I don't think it's from either of them, and nothing else on his IMDB entry jumps out at me. So, it may not be Van Dyke in the part.

The scene in question involves several children and the adult male character being held somewhere. It might be the local jail, or it might be a reform school for the kids. In any case, the pail of magic paint saves the day. The man paints a door on the wall, and they are able to open it like a real door and make their escape. IIRC, there were a couple of other times in the film when the man was able to paint something magical and useful in the story.

I saw this film or show on tv in the 1970s on "regular" tv (i.e. it wasn't a cable or pay channel thing). Pretty sure it was a weekend afternoon movie presentation. It was definitely in color, and probably came out in the 1960s or 70s. Might have been set in England. Unsure of the period setting of the film (modern, 19th century, etc.)

That's all I've got for this one. Truly sorry to be so vague, but I simply cannot recall anything else about the film.

I can't seem to track down any good details on this, but the 1971 Russian film Polchasa na chudesa (Полчаса на чудеса) was apparently released in English as Half Hour for Magic although I can find nothing online to support that. 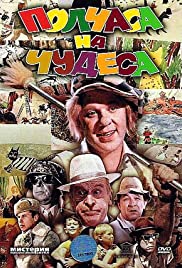 Children's tale about a boy who is given a magic paint brush with which he can do good things. He is chased by evil king's servants to undo things the boy does. Made for children.

Found with a search for movie "magic paint" site :imdb.com/title

You gave some vague indications that it might not be Mary Poppins (1964) but you should reconsider that.

In Mary Poppins, there is a scene where Miss Poppins and the kids come across Bert (played by Dick Van Dyke) making chalk drawings on the pavement. The four of them jump into the fantasy world of one of the paintings. 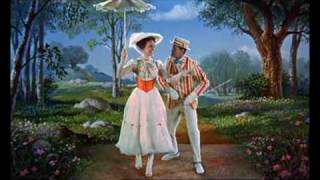 The movie jumps from a total live action into an extended animated sequence within the fantasy world of the drawings.

(British readers who wish to view the videos should mute their speakers to avoid being triggered by Dick Van Dyke's atrocious attempt at a Cockney accent.)

This is probably not the right answer, but I'm posting it as a partial answer for others looking for a similar film.

The Magic Brush and Ma Liang and his Magic Brush are a pair of Chinese stop-animated films about a magic paintbrush. 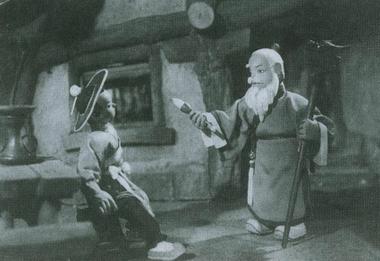 A young and kind peasant boy named Ma Liang helped a rich man to tend cattle. He liked drawing and drew pictures everywhere and had the greatest dream to be an artist. He works very hard to achieve this dream even though he doesn't own a paintbrush.

As Ma Liang gets ready for bed one night after looking at all his drawings, an elderly wizard-magician appears to him and says that he has earned a brush. He informs Ma Liang of the brush's great power and tells him to use it wisely. Before Ma Liang can thank him, the magician vanished. To test the power, Ma Liang uses the brush to paint a rooster. When he paints the last feather, the rooster comes to life and flies off. Realizing the power of the brush, Ma Liang vows to use it to help others and remembers the words of the wizard.

From that day on, Ma Liang used the paintbrush to help others with their needs or troubles. He paints a river which instantly becomes real wherein people can draw water from it to take to the field and save a lot of time and energy. Ma Liang later paints cows and water buffaloes which came to life, and farmers used these animals to till lands easily.

Many people knew about the magic paintbrush, one of which was a powerful mandarin, a government official, who pays a visit to Ma Liang and invites him to his home. Unknown to Ma Liang, the mandarin was a selfish and arrogant bad man who had an idea to steal the paintbrush and make a lot of money by turning things to life and keeping them. When Ma Liang refuses to heed the mandarin's commands to paint a pile of silver and gold coins for him due to his promise to the magician to use he brush wisely, he is imprisoned in a dungeon. There, his fellow prisoners reveal their innocence and their reason of being unjustly imprisoned; the mandarin wanted to seize their lands.

That night, after the prison guards and their captain were asleep, Ma Liang uses his magic brush to paint a door which later opens, allowing him and the other innocent people to escape silently. The guards awaken only to fail as Ma Liang painted a horse to escape quickly. Ma Liang goes into hiding and continues to use his magic brush to help people. He paints toys for children, paints a river and water wheel to irrigate farms, and more useful tools to ease people's work.

It's been adapted into several books, as well as at least one cartoon adaptation.

7
Post-Apocalyptic Book Possibly By Multiple Authors
9
Short story about Earth freezing over and the appeal of a frostbitten dancer
13
Late 70s/Early 80s - Artist paints the true nature of people
10
Fantasy novel, one armed protagonist
5
Film about an Irish writer who may be haunted by his wife's ghost
7
Help: Fantasy magic book series male genius similar to Name of the Wind
25
Old short story where humans deliberately pick an insane man to lead a contact mission with an alien species
13
Book with gender-disguised male magician, forbidden language, one character can talk to horses
8
Spooky computer game from late 90s/2000 where you fight skeleton pirates at the end