Did Luke know about Kylo Ren's obsession with Darth Vader?

One of the most notable aspects of Kylo Ren's character is his obsession with Darth Vader, evident in how he prays to Vader's charred helmet, how he tries to emulate him by wearing a mask, and even trying to obtain Anakin's lightsaber at the end of The Force Awakens.

In The Last Jedi when

Luke confronts Kylo Ren on Crait, we see Luke wielding the blue lightsaber. While Luke probably did not know that the ligthsaber in question had been destroyed earlier, a common explanation that I have heard for why Luke chose to appear with a blue lightsaber instead of his green one was in an effort to taunt Kylo, since he coveted the weapon.

However, I don't recall Luke ever mentioning that Ben was obsessed with (or at least interested in) Vader while Luke was training him; only that Luke had sensed darkness in Ben and that Snoke had already influenced him.

In addition to that, I could not find any footage of Rey ever saying anything about it to Luke. Is there any extant material to indicate that Luke was aware of Kylo Ren's obsession at any point? If so, is there any indication that Luke chose to display the blue lightsaber for this reason?

Ben never knew that Darth Vader was his grandfather when growing up (as Leia, Luke, and Han never told him) and presumably when he was training with Luke. This is mentioned in the canon novel, Bloodline by Claudia Gray when Leia's parentage is revealed publicly and Leia sends a message to her son to comfort and explain why she kept this truth from him.

Leia's confusion crystallized in an instant around one of her most terrible fears: He knows. No. Impossible. Nobody had ever known this besides her, Luke, and Han; she wasn't even sure whether Han had told Chewie. They hadn't even told Ben yet. So Ransolm couldn't have learned the most horrible truth of her life. There was no way. He had to be talking about something else. But what? There was nothing Leia could think of, nothing besides... Ransolm pointed at her and declared to the entire Galactic Senate, 'Senator Leia Organa is none other than the daughter of Darth Vader himself!'

As soon as C-3PO had readied the holocam, Leia went into her office and shut the door. What she was about to say was deeply private, even though it was about news that at this moment was no doubt racing to the very edges of known space. She needed to explain to Ben that they'd kept from telling him because they'd wanted to find the right moment. She realized now that she'd been fooling herself. Luke, too. There could be no good time to learn news this devastating --

Since Bloodline occurs six years prior to The Force Awakens, we can assume that Ben's fall took place shortly before the sequel trilogy started. Luke only mentions that Snoke influenced and had already turned Ben to the dark side; there is no mention that his nephew's concerning, growing obsession with the evil Darth Vader was a contributing factor. We can also see Ben's standard blue lightsaber before he modified it into the red crossguard lightsaber it is within the sequel trilogy. This can lead us to two logical conclusions:

a) Ben Solo's fascination with Darth Vader was probably motivated after learning his true lineage but Ben (as Kylo) only recently started his obsession over his grandfather after he attacked Luke's Jedi school.

b) Ben modified his lightsaber, cracking the kyber crystal in the process and giving it a crossguard look after he attacked his uncle and fellow pupils, meaning his image of being a Darth Vader-look alike didn't start until after this particular event. 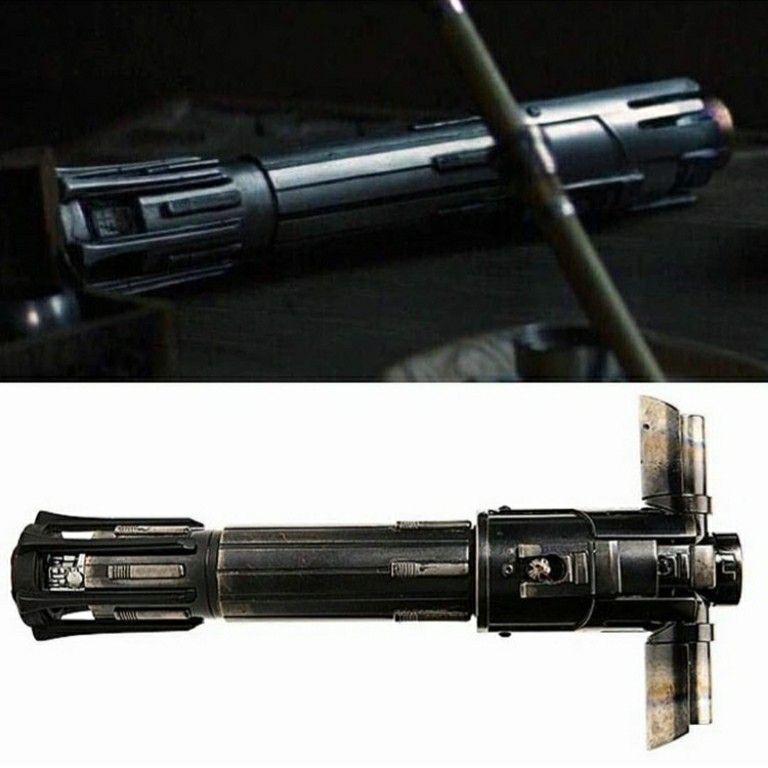 If so, Kylo Ren's motivation to become like his grandfather never occurred during his training years with Luke but after he joined the First Order around the age of 23. Thus, I believe it's a logical conclusion that any knowledge Luke has of Kylo's fascination with Vader occurred after his nephew's fall and moreover, would explain why Luke never mentions any sort of obsession with Vader during Ben's training (within the films at least).

We also know very little about the gap years between Episodes 6 and 7; I'm sure that perhaps in the future, more material will be released explaining Luke's knowledge regarding his nephew's fall.

As for the Skywalker Legacy Lightsaber...

As for Luke showing off the old blue lightsaber that Anakin owned before him, director Rian Johnson just stated when asked the question:

"[Luke] is basically tailoring this projection to have maximum effect on Kylo. He knows that Kylo’s Achilles heel is his rage, and so that’s why he kind of makes himself look younger, the way Kylo would’ve last seen him in their confrontation at the temple, and that’s why he decided to bring Kylo’s grandfather’s lightsaber down there - the lightsaber that Kylo screamed at Rey, ‘that’s mine, that belongs to me.’"

I have seen many explanations regarding this statement; however, the main point is that Luke just brought the lightsaber to anger Kylo, to remind him of his past (of which Kylo Ren is desperately trying to get rid of).

Not the answer you're looking for? Browse other questions tagged star-wars the-force-awakens the-last-jedi luke-skywalker or ask your own question.

23
By the end of The Force Awakens, who knows about Kylo Ren's family?
27
Is Anakin's lightsaber the only one remaining from the 'Clone Wars' era?
12
Could Kylo Ren's lightsaber contain the Kyber crystal from Vader's lightsaber?
1
Did Darth Vader feel remorse for killing Jedi?
36
Who turned on the lightsaber?
22
Did Darth Sidious ever intend for Darth Vader to kill him and take his place?
13
Did Leia know that Luke wasn't really there?
4
What is the meaning of this character hovering in the last jedi?