Read this question today and it got me thinking about another book I had read, about 10 - 15 years ago that featured similar spaceship battles.

I remember that the spaceships had shields and carried a complement of torpedos that would be fired in salvos in an attempt to reduce the opponents shields. When shields were raised the spaceships were effectively blind and the only way to get an update of the situation was to lower them again.

There were 2 or 3 antagonistic cultures, but the main character was I think working for a non-aligned organisation. This organisation was a mysterious one that no-one really knew much about and operated almost as a mercenary company but had its own moral code. That code decided which factions it would work with.

From memory the book was quite thick and most a dark cover. This is not The Forever War by Haldeman as I haven't read that book.

It sounds like one of the L.E. Modesitt, Jr. space novels; The Ethos Effect.

We have torpedo based space warfare with shields that prevent one seeing out and the mysterious unaligned organisation would be the IIS Foundation (led by the main character from the first book in the series, The Parafaith War) that hires the main character after he is discharged from the (Space) Navy of one of the main factions.

The general shape of firing, hiding behind shields and then lowering shields to see the dissipating remains of the enemy happens over and over again. 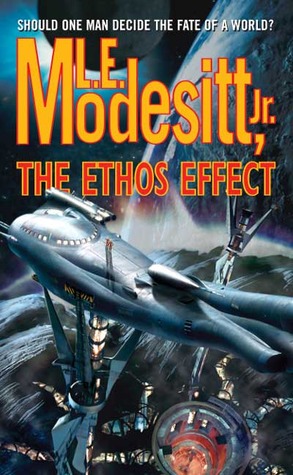 You may be thinking of one of the books in the Lieutenant Leary series by David Drake. The series is based on the 18th century British empire and the days of tall sailing ships. Except that the series is set thousands of years in the future, when mankind has spread throughout the galaxy, empires span star systems, and the tall ships are FTL-capable spaceships.

Spaceships are literally covered with masts and metal mesh sails, controlled using cables and pulleys. The sails create a field around the ship which lets it slip in and out of hyperspace. The stories contain long sections describing shipboard operations and how the ships navigate between star systems. It's all life on a 1700s sailing ship, moved thousands of years into the future.

The main characters are Lt. Leary, an officer of the Cinnabar navy, and Adele Mundy, an information specialist who meets Leary in the first book and becomes friends. Leary is a naval officer rather than a spy. But Mundy has a patron who gives her clandestine assignments associated with the events of the main story.

Now, you said submarines, not tall ships. But the spaceship battles in these books are similar to what you describe. Spaceships are frequently armed with torpedoes, along with guns and plasma beams. Ship-to-ship combat tactics involve slipping in and out of real space and sneaking up on your target through hyperspace. The second book in particular contains a climactic space battle which plays out like submarine warfare.

@AlanT is correct this is The Ethos Effect by L E Modesitt Jr, and I'll be awarding him the correct answer rep, but I wanted to add some extra information after googling the book. I wanted to be certain that this was the right book and felt that this could help other users in future (perhaps) after finding some of the extracted text from Google books.

The extract below details the firing of torpedos and the blindness effect I mentioned in my question. 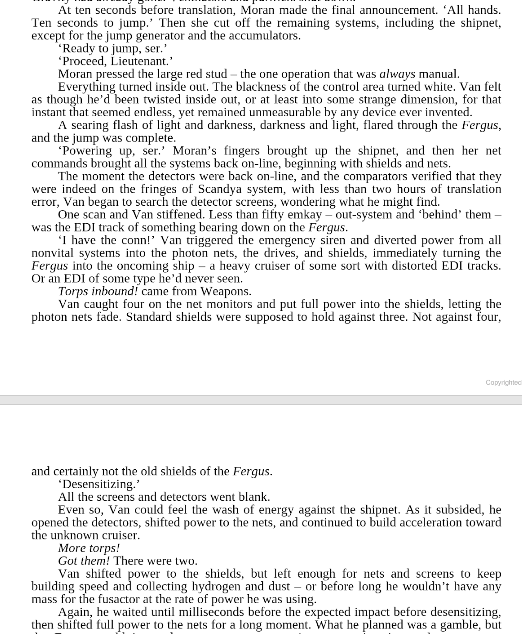 One scan and Van stiffened. Less than fifty emkay - out-system and 'behind' them - was the EDI track of something bearing down on the Fergus.
'I have conn!' Van triggered the emergency siren and diverted power from all the nonvital systems into the photon nets, the drives, and shields, immediately turning the Fergus into the oncoming ship - a heavy cruiser of some sort with distorted EDI tracks. Or an EDI of some type he'd never seen.
Torps inbound! came from Weapons.
Van caught four on the net monitors and put full power into the shield, letting the photon nets fade. Standard shields were supposed to hold against three, Not against four, and certainly not the old shields of the Fergus.
'Desensitizing.'
All the screens and detectors went blank.
Even so, Van could feel the wash of energy against the shipnet. As it subsided, he opened the detectors, shifted power to the nets, and continued to build acceleration toward the unknown cruiser.
More torps!
Got them! There were two.
Van shifted power to the shields, but left enough for nets and screens to keep building speed and collecting hydrogen and dust - or before long he wouldn't have any mass for the fusactor at the rate of power he was using.

The main character is Commander Van C Albert of the Republic Space Force of Taran (RSFS). The cover blurb from the book on Goodreads provides the following additional information about the story. IIS is indeed Integrated Information Systems founded by the protagonist from the Parafaith War, Trystin Desoll.

Set in the same universe as The Parafaith War (but two centuries later, and intended to be read independently), The Ethos Factor is the story of Commander Van C. Albert of the Republic Space Force of Taran, a brave and resourceful officer who once defeated a larger enemy ship but indirectly caused the loss of a civilian liner in the process. Cleared by the board of inquiry, but an embarrassment to the high command, he retains his commission but is given only dead-end assignments. For a time, he must watch helplessly as cold war among economic, religious and political rivals evolves toward interstellar open warfare.

Assigned as a military attaché at the Taran embassy on Scandya, Van is seriously wounded foiling an assassination. Decorated, promoted and summarily retired while still in a coma, he wakes to find himself honorably but intolerably unemployed. Then the harmless sounding Integrated Information Systems foundation of the Eco-Tech Coalition recruits him to fly a starship, Van finds he now has a powerful new vantage point not just for observation, but for action. The IIS has interests everywhere and Van is not just a pilot, but their point man in a conflict that will shake the worlds.

Modesitt uses a distinctive blend of space battles, political and economic intrigue, and issues of race and religion to address deep questions of good and evil, ethics and self-interest. Van Albert makes his decisions; it is for you to decide if he is a hero.

The cover I remembered was this one: 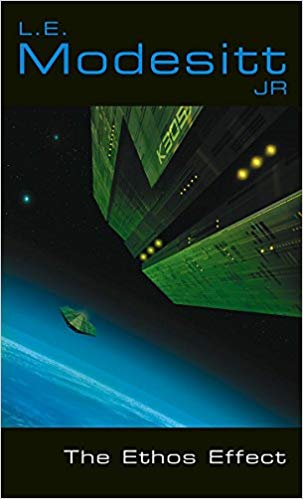 The space combat sounds similar to the system in the Mass Effect franchise (novels and video games). The torpedo system was called GARDIAN (sic).

The "mysterious organisation" could be Cerberus, for whom Commander Shepard was working with in the Mass Effect 2 game.

5
Book about space battles are more like submarine battles

6
Title of a comic read in late 80s featuring an ant-like insect alien race with wasp-like spaceships
17
Looking for a book about a huge war with dragons
16
Fantasy book with battle between owls and crows
6
Book about people with telepathy
7
What is the title of this fantasy book about kingdoms, thieves, wyverns, orbs, and prophecy?
6
Book about humanity's war with a species of bird-like aliens
9
Book about a DNA hacker who could customize people using animal DNA
15
Looking for a book about talking dragons with no humans