Why is this a joke, about the letter in Iron Druid?

In the epilogue of Scourged (Iron Druid Chronicles), a main character receives a letter that's written in red ink. The deliverer of the letter indicated that the sender had hoped the receiver would get the joke. What was the joke?

“Jesus wrote me a letter?”

“Yes, I thought it was a bit eccentric, for we haven’t so much as a book of stamps in heaven, never mind a postal service, but he likes to keep us guessing, you know.” She held out the letter to me and I took it.

“And also with you, Mary.” I looked at the envelope, which bore my name on it without an address. “Ha! He wrote it in red ink?”

Mary tittered. “He thought it was funny and said you might appreciate the joke.”

The joke is probably about "red letter edition Bibles"

Red letter edition bibles are those in which the Dominical words—those spoken by Jesus Christ, commonly only those spoken during His corporeal life on Earth—are printed rubricated, in red ink. This is a modern practice derived from the art and Roman Catholic practice in mediaeval scriptoria of rubricating headings, leading letters of sectional text, and words of text in manuscripts for emphasis, similar to italicization. Red letter editions are not to be confused with the Red-Letter Christian movement, which emphasizes the teachings of Jesus Christ in the Bible, particularly regarding social justice.

Because the letter is from Jesus, words spoken by him, it's in red.

It has been confirmed by the author. 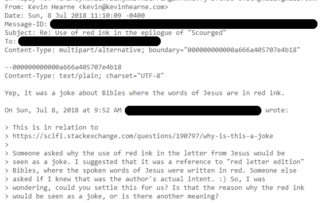 Yep, it was a joke about Bibles where the words of Jesus are in red ink

I asked my good friend Kevin Hearne this question (via Twitter) and he was kind enough to confirm that it's a joke on the "red letter editions" of bibles, where the words of Jesus are marked in red ink

@KevinHearne: Because of the Bible editions where the actual words of Jesus are in red ink and the rest is in black.

Since the entire letter is written by Jesus, the whole thing is in red.

Not the answer you're looking for? Browse other questions tagged iron-druid or ask your own question.