How was this character killed in Babylon 5 season 3 finale?

Sheridan refuses to join the Shadows and after fighting them off-camera, they finally corner him on a balcony over an abyss. He is wounded but able to walk, step on the edge of the balcony and jump into the abyss, while his White Star —armed with two nuclear bombs— crashes into (or nearby) the same place he is jumping from. At some point Sheridan dies, or at least that's what Lorien tells him.

But how did this happen...?

"I cannot create life, but I can breathe on the remaining embers...")

Is there any canon source/JMS commentary that explains the reason for this particular demise?

Well, he clearly considered himself dead, as evidenced by this quote from S4E21 "Rising Star". (Emphasis mine.)

I find it amazing that you think that threats still mean anything to me. 'Do this or you're a dead man.' Death! Been there, done that.

As far as I'm aware, the exact cause of death was never mentioned. I don't know that it matters, because whether he hit the bottom of the shaft or was vaporized by the nukes, he's just as dead.

However, I would interpret Lorien's quote slightly differently. Keep in mind that in Babylon 5, there is in fact a part of a person described as their "soul". We know this because there are people who capture them in little jars. I would say that this is what Lorien is talking about - the presence or absence of a vital soul, not a body per se.

Incidentally, checking the Lurker's Guide (which compiles J. Michael Straczynski's online responses to fan questions and discussions) for "Z'ha'dum" and the first few episodes of Season 4 reveals nothing concrete about cause of death.

I don't think we're ever told and certainly we're not shown but it is strongly implied that while his dive off the balcony jump took Sheridan out of range of the explosion of his Whitestar it also killed him, or would have killed him if Lorien hadn't intervened.

There's no way Sheridan escaped either the radiation or the blast wave of the White Star. He jumps only moments before the ship crashes into the skylight and detonates her nuclear warheads. Remember, close counts in nuclear war...

This is somewhat confirmed by the fact that Mr Morden also survived, albeit with major disfigurement that heavily implies he got a major dose of radiation and/or blast wave himself. 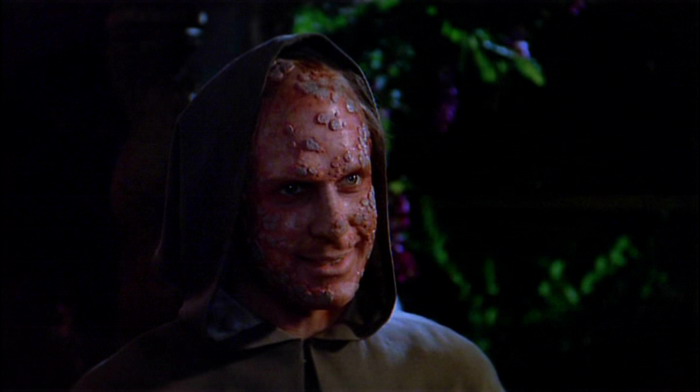 8
How did Kosh know to tell Sheridan to jump into the abyss on Z'ha'dum?

23
When was Babylon 5 constructed, and how long did it take?
20
Why does Londo respond differently to Kosh in the Season 2 finale?
9
Babylon 5 season 3 A Day In The Strife - First contact situation
17
Why do some characters get moving headshots in the Babylon 5 season 3 intro sequence?
9
What is the exact relationship between EarthForce and Babylon 5 during season 5?
38
Was Season 4 of Babylon 5 always meant to have two wars?
8
Why did this Babylon-5 character turn against the Vorlons?
6
Who sent the alien probe to Babylon-5 in this episode?
9
How was Babylon 5 able to wage war against Earth, given that Babylon 5 was grossly outnumbered in terms of resources?
5
Who's who in the intro voices for Babylon 5 season 4?