I’m looking for a young adult fantasy book that I read in middle school, I think. It’s a series I think.

It was about a kid that gets transported to another world that is parallel to his. Everyone in his world exists in the other world, and if someone dies in one, they die in the other. In the other world there was a powerful king who had some sort of magical power. He was betrayed by his advisor I believe but became more powerful I think.

The story line was very biblical, as I remember it. The advisor wanted power for themselves and started a kingdom of his own after his assassination failed. After that people’s eyes flashed red green or blue depending on their allegiance. Red if they sided with the evil advisor guy, blue if they sided with the king and green if they didn’t choose either side. The kid joins with the king and eventually brings a few of his friends I think.

The kings forces lose the war and the kid and his friends are offered a choice of joining the evil side or being executed. They are executed and then they are greeted by the king in some kind of heavenscape and the king uses his power after that to defeat the evil side.

Could this be The Door Within by Wayne Thomas Batson? 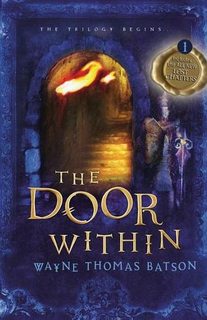 In The Door Within Trilogy, the Glimpses' eyes change colour depending on their affiliation: Blue for King Eliam, Red for Paragor, and Green for neutral/undecided.

(I found this searching the Eye Color Change page on TVTropes.)

The following quotes are all from the Wikipedia page on the book:

It was about a kid that gets transported to another world that is parallel to his. Everyone in his world exists in the other world, and if someone dies in one they die in the other.

"Glimpse" is the name given to the humanoid inhabitants of the 'Realm', a parallel universe [...] wherein the story is set. [...] each Glimpse corresponds to a human in appearance, personality, allegiance/beliefs, and time of death, though not necessarily in age.

If a human chooses to believe that the "Story" of the Realm (also known as The Book of Alleble) is true, the Glimpse will side with King Eliam, the Godlike king of Alleble, whereupon its eyes glint blue; if a human chooses to scorn the Story, the Glimpse sides with the rebel Paragor (a Lucifer-like character who is the principal villain of the series), whereupon its eyes glint red; if the human does not choose either, the Glimpse will remain independent and its eyes will glint green.

Upon dying, each Glimpse is united with its human and transcends both worlds in favor of an afterlife. Followers of King Eliam join their master in a world known as the 'Sacred Realm Beyond the Sun'