Why did Venom fight Jack O'Lantern?

The following question is related to my previous question:

What was the fight between Venom and Jack O'Lantern really about?

My previous question asked whether or not a comic-book character Jack O'Lantern was part of the DC Universe, or the Marvel Universe which concludes that he was part of both.

There is a comic book series called Venomverse which comprises of exactly five issues. The following parts of this question will contain spoilers from that.

It was never explicitly stated, and at the end of the fight, Venom murdered Jack O'Lantern, aware of witnesses (before he was teleported into the Venom Universe and coerced into joining a "venom" clan known as The Resistance.) Throughout the rest of the comic series, it is unknown why both characters were fighting, nor why Venom decided to finish Jack O'Lantern. 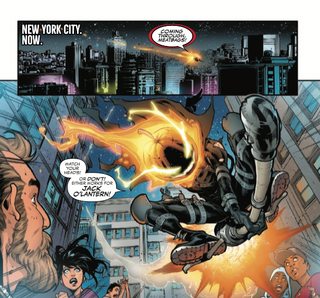 Venom Kills "Jack" and then Teleports 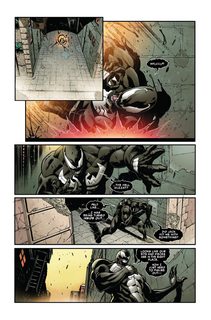 First - Venom does not kill Jack O'Lantern (or at least, he doesn't think he has, as shown in the same issue of Venomverse that you've referenced): 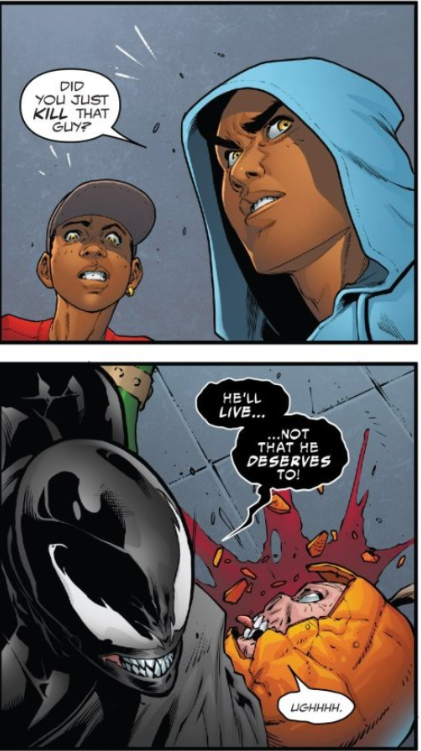 Venom wants to fight Jack O'Lantern because they've run into each other. Jack was one of the people who forced him to bond with the Toxin symbiote (a descendant of the Venom symbiote), something he did not want to do (as seen in Venom (2011) # 17). This happened while the symbiote was bonded with Flash Thompson (see below), and during that time Jack threatened or killed several people close to him on numerous occasions - the symbiote may have its own reasons to take him down, from that experience.

Above and beyond that, though, your question as to why two bad guys are fighting has a TL;DR answer: because Jack's a bad guy, but Venom's a hero. Just ask him.

Venom's rarely been and out-and-out villain.

Venom originally came out of two stories in the Spider-Man titles in the mid 1980s.

In reality, the costume was an alien symbiote. It enhanced Spider-Man's powers slightly, let him shoot webs without his mechanical web-shooters, and was able to change its appearance to look like regular clothes (making chaging into his costume easier). However, it wanted to bond "permanently" with him, and would take his body out while he thought he was asleep. When Reed Richards of the Fantastic Four figured out that the costume was an alien life-form, they separated it from Spider-Man, and locked it away.

It escaped, and tried to bond with Spider-Man again. He knew it was vulnerable to fire and sonics, so he went to a church with a huge bell, rang the heck out of it, and almost killed the symbiote (in Web of Spider-Man #1).

Not long thereafter a different Spider-Man story, featuring a non-super-powered person called the Sin-Eater (Peter Parker, the Spectacular Spider-Man #107-110) involved a plot point where one person was accused of being this Sin-Eater in print, but another person turned out to actually be the Sin-Eater.

Eddie Brock was responsible for that false accusation in print, and he was fired for it. He blamed Spider-Man for ruining his life. And, he went to a church while trying to deal with things.

Naturally, the same church where the symbiote had been detached from Spider-Man. However, it hadn't been killed - and guess what - it also was upset with Spider-Man.

The symbiote attaches itself to Eddie, they discover they have something in common, and they bond. The symbiote has the ability to mimic Spider-Man's powers (and go unnoticed by his spider-sense).

Both Eddie and the symbiote were a bit unbalanced before they bonded; together, they were (at least borderline) insane. They think of themselves as a heroic figure - but they'll kill their opponents. And, of course, they think of Spider-Man as a bad guy.

Years later, Eddie and the symbiote are separated. Others bond with the symbiote: a gangster; Mac Gargan (A.K.A. the Scorpion), and Flash Thompson.

Gargan's Venom was perhaps even worse than Brock's. However, Flash was able to maintain control of the symbiote far better than his predecessors.

While Flash was Venom, we learned that the symbiote's species were called the Klyntar, and that its behavior was not at all typical. Its insanity was basically cured, and Venom became an out-and-out hero.

However, Flash was separated from the symbiote not long after that. It was bonded for a short while with a criminal (and it fought being used to hurt others). However, Eddie was involved in getting the symbiote separated from its new host - and re-bonded with it.

Long story short - both Eddie and the symbiote were mentally healthier than they had been, and since rebonding, have been much closer to heroic than they had been before. Still prone to extreme violence, as you saw, but not completely crazy.

Not the answer you're looking for? Browse other questions tagged marvel comics venom or ask your own question.

8
Is Jack-O-Lantern part of the DC Universe, or the Marvel Universe?

2
Why don't spider webs work in space?
100
Why do the people in MarvelVerse dislike X-Men more than other superheroes?
9
Why did nobody stop the train during the Spider-Man 2 train scene?
10
Was there a one-off Spider-Man public awareness / anti-drug comic given away with chocolate pudding in the early 90s?
72
How was Spider-Man persuaded to join the side he did?
17
Where/What are Venom's eyes?
8
Is Jack-O-Lantern part of the DC Universe, or the Marvel Universe?
12
Why is Jefferson Davis-Morales working for PDNY (instead of NYPD)?
10
Spider-Man and Fantastic 4 crossover comic with Double Identity Scene
10
Why did Miles Morales get non-spider-like powers (bio-electrokinesis and invisibility) that are vastly different from the other spider people?