Who are Princess Celestia and Princess Luna's mother and father?

Who are Princess Celestia and Princess Luna's parents? 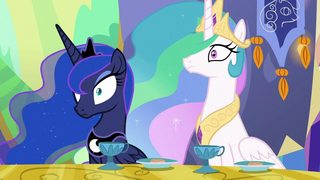 Unknown and (as yet) unstated. Her parentage hasn't been revealed for fear that it would de-rank her.

"I know "princess" sounds cuter and helps sell more toys, and because of that you were probably forced to keep her as a princess by the powers that be..."

LF: That's what happened. I was told that because of Disney movies, girls assume that Queens are evil (although I only remember 1 evil queen) and Princesses are good. I was also told that the perceived youth of a Princess is preferable to consumers.

She does not have parents that outrank her. I brought the weirdness of that situation to my bosses, but it did not seem to be a continuity concern to them, so I'm letting it alone. I always wanted her to be the highest authority, and so she remains so. And I certainly don't want marriage to be what would escalate her. (Bad messages to girls and what not.)

Sorry I couldn't give you a more satisfying answer. Maybe as the series goes on we can thread something together. I put up a bit of a fight when her title changed, but you win some, you lose some.

18
What's the explanation for Luna's change in appearance?
30
Pony ages in My Little Pony: Friendship Is Magic
12
How powerful is Twilight Sparkle?
8
Are earth ponies represented in the government of Equestria?
1
How much does Celestia know about Zecora?
2
Are Equestria's Princesss Celestia and EG Principal Celestia aware of each other?
4
Does Sunset Shimmer have a human equivalent?
4
Why does Princess Twilight Sparkle's castle lack guards and other servants?
7
Were Celestia and Luna born as alicorn?
3
Does Equestria have elections?