Looking for the title of a book about alien invasion, mining asteroids and using lasers to defend earth

What I remember of this novel/series is that the main character creates solar laser satellites and mines asteroids to create more satellites to defend Earth from aliens. Later on, he uses the hollowed out asteroids as a base and eventually as an armored fortress to repulse the alien fleets. I last remember the main character attempting to hollow out more asteroids to defend and attack the aliens eventually.

The protagonist puts mirrors in orbit to focus the sun and he does create a very large battle station out of an asteroid.

Troy Rising is a book in three parts—Live Free or Die being the first part—detailing the freeing of Earth from alien conquerors, the first steps into space using off-world technologies and the creation of Troy, a thousand trillion ton battlestation designed to secure the Solar System.

Citadel continues the saga begun in Live Free or Die, following the paths of several characters during the first years of The Spiral Arm Wars culminating in the First Battle of E Eridani. 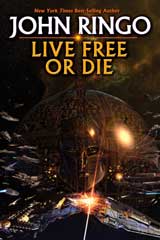 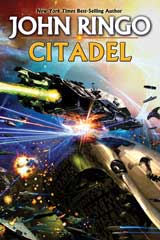 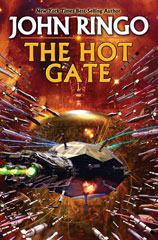 5
Series of novels involving aliens dragging a wormhole by the Earth, and a virus that makes blonde women want to breed
6
Alien disease for repopulation

6
Aliens abduct mathematician, astronomer, woman
7
Looking for the name of a book where a physicist gets transported to a medieval world
17
Looking for sci-fi book about alien invasion where Earth builds a giant laser to stop an incoming alien fleet
3
Book series about a kid's journey to the center of the Earth where he finds the Earth is an alien ship or something
10
Scifi novel about a prison station in the sun that turns into an alien invasion
7
YA sci-fi novel with teens given superpowers in order to defend Earth against an alien invasion