Anime about a teenager with superpowers who hunts demons

It's this anime where there's this teenager. He lives alone and has superpowers, but people at school don't know; he's also a bit of a loner.

I remember at some point, maybe in the first episode, this girl that goes to his school is on a train and looks out the window to see him killing someone (pretty sure he was killing a demon), and she sees this supernatural blue light (from a power or something).

Code:Breaker (2012), which I suggested as a partial match, was confirmed by the OP in the comments.

Riding the bus one day, Sakurakouji Sakura looks out the window to see people being burned alive with a blue fire and a boy her age who's unharmed and standing over the people.

She comes back to the site the next day and there are no corpses or evidence of any kind of murder, just a small fire. She then goes to class to find there's a new transfer student, Oogami Rei, who looks exactly like the boy she saw before and wears a black glove only on his left hand.

Oogami is a Code Breaker, one who "does not exist". He is a seemingly cold-blooded killer who follows the principle of "an eye for an eye", to "use evil against evil". Convinced that killing is not right, Sakurakouji sets out to stop him and penetrate his icy heart.

Below is the anime's official trailer, which begins with the scene OP described: girl looks out the bus' window and sees Oogami burning people up with his blue flames. 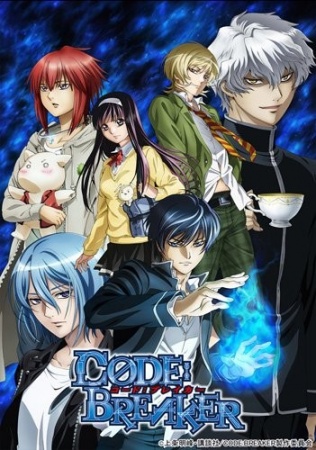 5
Anime with boy who can see fighting mecha robots in parallel world
5
Webcomic from around 2014-16 about demons and pacts
4
Anime about demons that take over Earth they were created by humans. Girls called fairies fight them to take earth back
3
Anime where a kid has a small humanoid magical companion who has a round shape and wings
3
Anime in which 4 school children go into a game and rescue the world; they meet a pink-haired girl inside the game who helps them
10
Sci-Fi/Fantasy Anime about a girl who turns into a world-destroyer
3
Anime where a popular teen becomes a demon slayer
3
Female anime character with powers and an amulet on her chest
0
Anime: main character has a gem in his head, in which an old man resides later on, who can use blood magic
6
What's the anime where a girl who comes to town to fight an enemy meets a guy who lives with an old man? (It's not Bleach)