This is a long-shot as I remember very little about the book. It may not even have been written in English, but in Dutch.

I read this in the first half of the 1980's. Got it from my school library. I read it in Dutch (had to be Dutch because the school library only had "proper literature" in English), but chances are it was a translation of an English original as there is not that much original SF/Fantasy in Dutch.

A soldier (USA I think) is fighting at Verdun during the infamous World War 1 battle. He enters a cave or tunnel beneath the city (possibly hidden and revealed by a bomb explosion during the battle).
The cave/tunnel transports him to an alternative reality, fantasy/medieval style where the city also exists, but it is now called "Dun" or "Dunn".

I seem to recall that in the alternative universe the city is under siege as well. The protagonist has some adventures (I can't recall any of them) and I also can't remember if he eventually makes it back to the normal Verdun.
(It may even be the case he goes back and forth several times now I think about it.)

There is very little to go on, but somehow this book lingered in the back of my mind, so it must have made some impression on me. Does anyone know what it is? 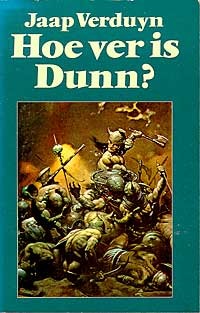 I cannot find a copy of the book to confirm the identification but it roughly matches.

Not the answer you're looking for? Browse other questions tagged story-identification books parallel-universe or ask your own question.