Were all titans as powerful as Thanos?

In Guardians of the Galaxy we learn that only someone with great power can touch an Infinity Stone, yet we see Thanos pick them up with no issue. Even without the stones, Thanos is shown to be extremely powerful and feared throughout the galaxy.

Were all Titans as strong as Thanos, i.e. could they all happily hold Infinity Stones?

In the Marvel Cinematic Universe there is little information on the Titans, so I'll accept answers from all around the Marvel universe.

The Titans of the Marvel Universe, as orginally conceived by Jim Starlin, are of very different power levels, but few (if any) are as powerful as Thanos. Starlin conceived the Titans as an offshoot branch of the Greek Gods, with Thanos' father Mentor being the brother of Zeus. Thanos' brother Eros, who became an Avenger by the name Starfox, is portrayed as rather strong, but not at Thanos' level. However, being gods, all the Titans could feasibly be able to handle the Infinity Stones.

Marvel later retconned the Titans to be an offshoot of the immortal Eternals, which means that we should compare Thanos' power levels to these. Since the Eternals, as originally conceived by Jack Kirby, cannot be killed by any means, it would stand to reason that they cannot be killed by the Infinity Stones, either, no matter their power level in other spheres. This idea of total immortality was, however, diluted in later versions. At any rate, there has been a lot of inconsistency about the immortality of Eternals over time. Great Zuras, for instance, was killed during the arrival of the Final Host of Celestials. In Neil Gaiman's run, Zuras killed Sprite, another example of mortality.

Also worth noting is that handling Infinity Stones seems to be easier if the handler isn't in direct physical contact with the stone. Ronan and Loki could handle their stones easily when affixed to staffs, and Doctor Strange can handle his stone when it is in the Eye of Agamotto. Thanos uses gloves when handling the Infinity Stones, which may be why he has no serious issues. In addition, the stones seem to be very different in how hard they are to handle. Vision has no problems carrying one in his forehead, and both Loki and the Red Skull handled the Tesseract stone barehanded without issues.

To understand what the Titans are, you need to understand the difference between an Eternal and a Deviant. 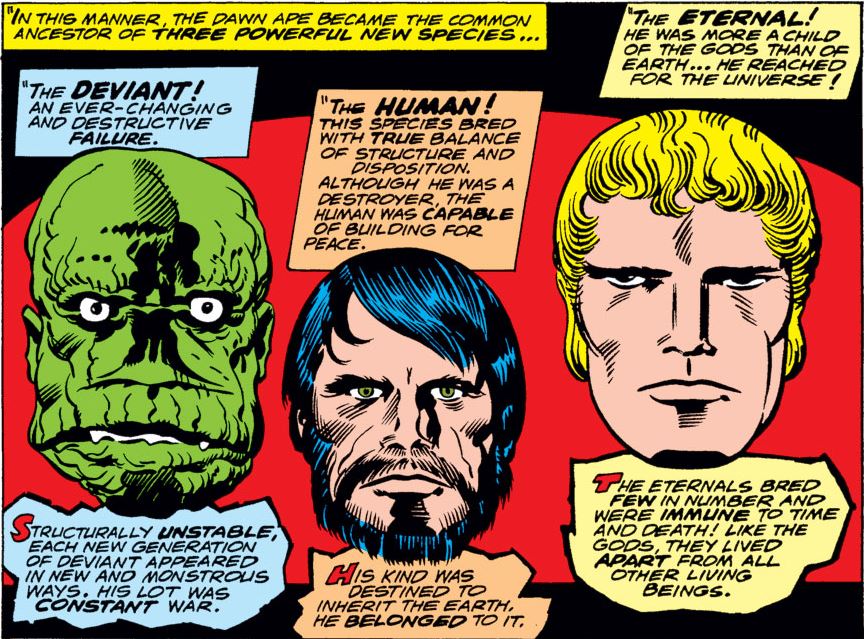 A race of god-like creatures called the Celestials had a habit of wandering around the cosmos, splitting races into their basic, Eternal, and Deviant forms. The reasons they did this have not been adequately explained in a way that hasn't been retconned to my knowledge, so let's just say they did it for fun.

The Titans are the "Eternal" form that humans take. Eternals are beautiful, powerful, smart. "Perfect." They are this controlled version of what perfection of a species looks like. As the Celestials spanned the universe, there are Eternal versions of other species, such as the Kree, as well as Deviant versions of other species, such as the Skrulls (assuming they show up in the MCU at some point).

But Thanos is No Mere Titan

Thanos is a Titan, and therefore of a breed that is perfect. But the Celestials also left Deviants. Whereas Eternals are perfect, Deviants are chaos. Their genes mutate from generation to generation, creating wildly different looks between members of their race (Deviants are often hideous) and the possibility of super powers.

Thanos simultaneously has these perfect Eternal genes, giving him great power, but also carries Deviant genes, which also gives him great power. This is also why he is purple, and looks nothing like either of his parents (the chaos of a Deviant gene).

Nobody compares to Thanos.

Considering the Eternals, Titans, Celestials and Deviants are going to be tackled differently in the MCU than they are in 616, I'll use 616 to explain.

The Celestials basically went around the cosmos and created different types of beings. The Eternals are versions of said race that are the perfected organic forms of those creatures taken to the apex of their evolution. The Deviants are the mistakes the Celestials made in trying to do so. The Deviants tend to be misshapen and unstable. Capable of having more power and mutations than even the Eternals, however they're incredibly unstable. The Kree, Skrull and many other alien races have their own versions of these beings. Due to humanity having the X-gene, our ultimate evolution (without the aid of technology and whilst maintaining our general form) consists of enlightened, beautiful, genius people with superpowers and immortality. A sect of these people split off and traveled to Titan, where they settled and made a colony.

Thanos was born with the Deviant gene from an Eternal mother and father. Meaning he was born with the perfection and stabilization of form as well as immortality. However, he's also hideous and tremendously powerful and intelligent when compared to the rest of his people. So Thanos had a good starting base. However, Thanos has only increased all of these attributes over the hundreds of years through biological mutation, technology and magic. Without sacrificing what makes him whole. Meaning he never went full blown crazy with his enhancements, like Higher Evolutionary.

After all of this, Thanos is only the second most powerful Eternal/Deviant in the Universe. His base form is surpassed by his Grandfather, who accidentally fused his consciousness with the cosmos becoming Kronos. The cosmic entity that created Drax the Destroyer. Thanos has become more powerful than Kronos, but it was only through external means. Like the Cosmic cube, Infinity Gauntlet, Heart of the Universe, etc.

So Kronos is the most powerful Eternal/Deviant in 616, if you could even call him that anymore.

In the comics, Thanos is far more powerful than the rest of his race, but as externals they also have powers and longevity. His brother was a superhero white powers, for example. Thanos was a mutant among his people and enhanced his own power, as did death when she resurrected him.

Not the answer you're looking for? Browse other questions tagged marvel marvel-cinematic-universe comics avengers-infinity-war thanos or ask your own question.

9
How could Thanos survive this attack?

11
Why didn't Thanos make an attempt to steal the Aether?
40
What's with Thanos' "headquarters"?
17
Is Thanos a Mutant among Titans?
11
How does Thanos know what size slot is needed to hold each Infinity Stone?
9
Did Avengers: Infinity War ignore the locations/distances set in Guardians of the Galaxy?
1
How did Thanos know the Tesseract would be with Loki on the Asgardian ship?
8
How did Thanos get the soul stone in What-If...?