The Remembrall - What did Neville forget?

I was re-reading the first book and in it said:

"'It’s a Remembrall!’ he explained. ‘Gran knows I forget things – this tells you if there’s something you’ve forgotten to do. Look, you hold it tight like this and if it turns red – oh…’ His face fell, because the Remembrall had suddenly glowed scarlet, ‘… you’ve forgotten something…’ "
Philosopher's Stone - Chapter 9: The Midnight Duel

I read that chapter carefully and I'm pretty sure it doesn't say what he forgot. Do we ever find out what forgot?

It wasn't Mrs. Norris. It was Neville. He was curled up on the floor, fast asleep, but jerked suddenly awake as they crept nearer. "Thank goodness you found me! I've been out here for hours, I couldn't remember the new password to get in to bed."

The Remembrall must've been trying to remind him about the new password, but Neville forgot, which lead to him camping outside the portrait hole and having to follow Harry, Ron and Hermione.

Rowling never said. The book says he was trying to remember, then the scene ends without him remembering, and it never brought up again.

Neville was trying to remember what he’d forgotten when Draco Malfoy, who was passing the Gryffindor table, snatched the Remembrall out of his hand. Harry and Ron jumped to their feet. They were half hoping for a reason to fight Malfoy, but Professor McGonagall, who could spot trouble quicker than any teacher in the school, was there in a flash.
‘What’s going on?’
‘Malfoy’s got my Remembrall, Professor.’
Scowling, Malfoy quickly dropped the Remembrall back on the table.
‘Just looking,’ he said, and he sloped away with Crabbe and Goyle behind him.

At three-thirty that afternoon, Harry, Ron and the other Gryffindors hurried down the front steps into the grounds for their first flying lesson...
Philosopher's Stone - Chapter 9: The Midnight Duel

However, in the movie, he forgot to put on his robe. In multiple shots you can see he is the only student not wearing a robe. 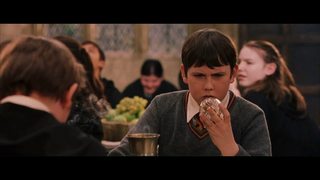 JKR worked very closely with the director, Chris Columbus on the film, so details like this in the flim are likely to be as close to an answer as we will get.

Director Chris Columbus says he's being very careful to work with author J.K. Rowling to get the little details right when translating her book to film.
Archived IGN article from 2001

JK Rowling: Yes, they do. I mean there are obviously things that are not the same as the books but that is because if you did every scene in the book and translated that into films, the films would be about 24 hours each, so they have got to prune and change things slightly. By and large they meet my expectations.

I have spoken about walking into the Great Hall, I have worked with Chris Columbus, the director of the first two films, and he asked me quite a lot about how things looked, it was really like walking into my own head, it was a very peculiar experience.
Press Conference with JKR on July 16, 2005 - Accio Quote

I've always had this feeling that the remembrall turning red hinted at something much larger than his robes. I feel like he had forgotten something about his parents, like the fact that they were in the order of the phoenix.

21
What led to the change in Neville Longbottom?
21
Why did Snape have it in for Neville?
19
How did Lupin forget there was a full moon?
5
When did Neville Longbottom lose his parents?
27
How can a Seeker practice if the Snitch can't be touched prior to a Quidditch match?
10
What's the point of a Remembrall?
4
Did any Hogwarts Professor ever forget their student's name?