Why didn’t Lt. Saavik tell Kirk to bring Spock's body to Vulcan instead of leaving it on Genesis?

In Star Trek II: The Wrath of Khan, Spock tragically sacrifices himself to save the Enterprise. During his funeral, his body is jettisoned from the ship onto the planet Genesis.

In the following film, Star Trek III: The Search for Spock, Sarek criticizes Kirk for not bringing his body to Vulcan instead.

Sarek: Why did you leave him on Genesis! Spock trusted you. You denied him his future!

Kirk: I saw no future.

Sarek: Only his body was in death, Kirk. And you were the last one to be with him.

After Kirk asks questions about what he means, Sarek clarifies.

Sarek: I had assumed he mind-melded with you. It is the Vulcan way ...when the body's end is near.

However, Lt. Saavik, another Vulcan, was aboard the Enterprise when all this happened. Why didn't she ask these same questions about whom Spock might have mind-melded with? Why didn't she investigate more into this and advocate for bringing Spock's body to Vulcan, rather than jettisoning it to the planet?

I think this is a misinterpretation of this line

By 'with him' Sarek is referring to Spock's Katra, not his body. Saavik probably either assumed the same thing as Sarek (that Kirk had the Katra and would thus know what to do with it) or believed that Spock's Katra was simply gone.

So that leaves the question of why Sarek would say this...

Sarek: Why did you leave him on Genesis!

Perhaps it's typical or preferable to have both the body and the Katra available for the death rituals. However, even in this case, it's likely that Saavik, knowing more about the details of Spock's death, knew that there was no Katra and thus nothing to be done.

Though not mentioned on screen in the final film, the original script refers to Saavik as half-Vulcan, half-Romulan. In that case it's quite likely that her upbringing might not have exposed her to the full extent of Vulcan traditions and death rituals. So not suggesting the body should be brought back to Vulcan may have been an act of ignorance.

The katra refusion belief seems to have been somewhat limited

It's not clear how much of Vulcan believed in katra and its various uses, but it's clear that the idea of rejoining body and soul was a belief most Vulcans did not share. We've not seen any other Vulcans use katra like Sarek and Spock have. Even Sarek himself wasn't sure it would work.

SAREK: I ask for fal-tor-pan, the refusion.
PRIESTESS: What you seek has not been done since ages past, and then, only in legend. Your request is not logical.
SAREK: Forgive me, T'Lar. My logic is uncertain where my son is concerned. 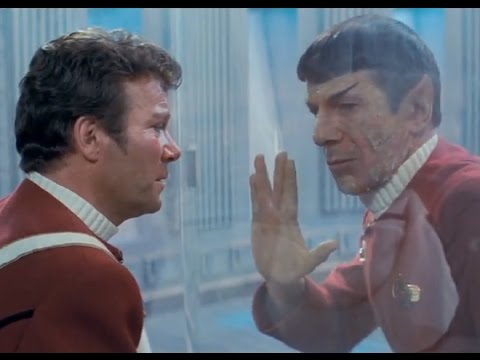 One of the major problems with trying to bring Spock back in general was that his body had absorbed a lethal dose of radiation. That Spock dies within minutes speaks to how much radiation he was exposed to. Even if she has been a believer in katra refusion, Spock's body was far beyond any use. It's only after having been regenerated on Genesis that the refusion was even an option.

Saavik was on the bridge when it happened. By the time Sarek confronts Kirk, Saavik had already been reassigned to assist the USS Grissom in investigating Genesis. It would make sense that she didn't have time to review it herself.

5
Carol Marcus learning about David after The Search for Spock
4
What normally happens to a Katra?
7
Why couldn't McCoy catch a ride with Spock's dad back to Vulcan in Star Trek III?
13
What did Enterprise do while the away team was underground on Regula?
14
What was Saavik implying by this question?
15
Where is Sybok during Michael and Spock's childhood?
13
Could Khan have used the Enterprise's prefix codes to lower its shields?
5
Why did James Kirk and the Enterprise return to Planet Genesis so soon?
23
Why didn't James Kirk destroy the Reliant instead of (or while) trying to escape?