Gutsworld - a Graphic Novel about a Puritan, Victorian-Era Society trapped in a Whale-like Creature

What I'm looking for now is Visual Evidence of this thing's existence. Everything I've got together so far is below, and in the comments.

It was about a Puritan, Victorian-era society trapped in a whale-like creature. I remember it being called "Gutsworld", but upon looking it up, all I could find was a Wrestling Organization by the same name.

Looking up Civilization inside whale and related search terms came up with nothing.

It was a Graphic Novel, available to order on the internet, I think. Earlier than 2017 but after 2013, at least that's when I came across it; might have been made earlier.

Here is the only living mention of it on any site I can find. The link on the webpage takes me to a dead IP address. I put this into the Wayback Machine and it came up with this (I'm not very experienced using this, so if anyone can get more info out of it that would be a huge help).

Apparently the reason it's a dead IP is because Newsarama, the site that hosted these forums, was bought and has shut down the forum service. They deleted the entire archives of the forums when they did so.

So, it would appear there is more to this tale than meets the eye. 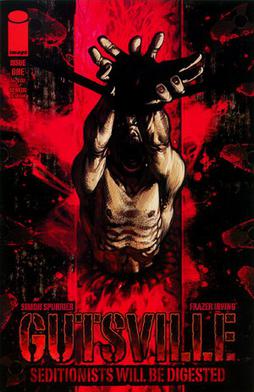 According to the Wikipedia description:

In 1846 an English ship called the Daphne heads out to reach Australia. The ship never makes it, as it, and all of its passengers (including slaves, zealous missionaries, and English settlers) are swallowed up by some gargantuan, oceanic beast. Skip forward to the present day and the descendants of the original passengers are living in Gutsville, a shanty town within the belly of this mysterious creature.

I found it by putting the URL in this website, which showed that the Newsrama forum URL had been linked from the above Wikipedia page.

It appears that the website Wetasphalt had misremembered it the same way as the OP: as Gutsworld.

It's not terribly obscure, having been published by Image Comics, but it was first written in 2007, so it was early enough.

Not the answer you're looking for? Browse other questions tagged story-identification illustrated-story or ask your own question.

14
Old movie with abandoned spaceship and skull in helmet
7
1990s era movie about people tranforming into bird-like creatures?
5
Dragon-like creature trying to find another creature like itself
7
Creepy children's book where a homunculus was made
9
Novel about utopian society vs. authoritarian society
4
Graphic novel about an older Jason of the Argonauts fame