What happens if the Winter Soldier commands himself?

The Winter Soldier can be programmed using Russian words, making him comply with whoever speaks those in front of him. What would happen if he, himself, speaks those words? Will he go into an infinite coma or he will be doing random stuff whatever comes to his mind? What could be the possible outcomes?

Has this been covered in any canon Marvel works? Be it comics or cinematic?

In the comics (Captain America (2004) #14), James Barnes was freed from his Russian programming by Steve Rogers, when Steve had access to a (partial, I think) cosmic cube. 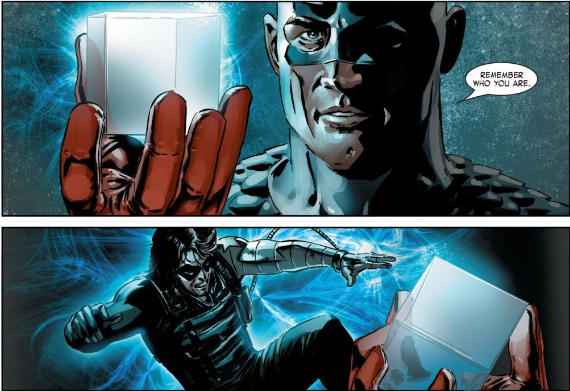 Since then, there's been no evidence that there are any "command codes" or the like that can revert him to his former Russian programming - despite the fact that this should have simply restored his memories.

We are left to assume that having his full identity back was enough to either erase any "deep programming", or that such programming was deemed unnecessary, since James didn't have an intact identity.

4
How long has the Winter Soldier been active?
1
Mystique replicating a target's attire, how does it work?
48
Why Didn't The Winter Soldier Keep Captain America's Shield?
1
Why don't Kilgrave's commands affect Kilgrave himself?
29
Why did the Winter Soldier kill these characters?
6
What would happen if a mortal possessed all 6 Infinity Stones?
8
Which dimensions from Spider-Man: Into the Spider-Verse exist in other works?