Book about family with wings, and the protagonist has to learn how to fly(?)

I remember the book because I really liked it while I was in elementary school (19 now). But the premise was that the girl's family all had wings on their backs that they kept tucked tightly so they could operate like normal humans. However, as the story evolves, something changes and the girl slowly learns to use her wings to fly (which none of her family has done before).

The little girl was in either middle or high school. Please help because I really want to find this book again.

Could this be Lauren Winter's Growing Wings? 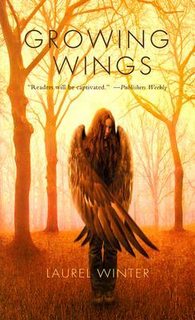 Eleven-year-old Linnet is growing wings from her shoulder blades. She is shocked, but her mother Sarah expected it; after all, she began to grow wings at about the same age -- but her mother cut them off. Linnet and Sarah don't know what to do, but Linnet stumbles into a community of people like her, who live in a secluded place in the mountains, under the threat of exposure. I thought the premise was unusual and interesting, but it wasn't developed enough to really grab me.

It was first published in 2000, which means it was out when you were in Elementary School. It involves "wings" in the title and hereditary wings which must be hidden or removed. They generally can't fly, but the reviews suggest that Linnet does manage flight by the end.

Not the answer you're looking for? Browse other questions tagged story-identification urban-fantasy or ask your own question.

7
YA book about sister being alien, discovering telekinetic powers in a car accident
7
Remembering a 90's childrens book about disease, female protagonist with a mutant sheep?
7
Book about girl who learn she's a clone?
6
Book set in modern times with a disabled boy who has a dragon for a friend and protector
5
Book about a girl with magic and a boy a with curse
12
Book about a shapeshifter hunting the women of a family
5
Books about four people with telekinetic powers set in the future
5
Help me find this supernatural/fantasy book about the daughter of a rich criminal