Was the governing council of Zion also the new Zion seed population?

In Matrix Reloaded, Neo asks Councillor Hamann, in a seemingly rather pointless rhetorical jab, why there only old men on the council.

Later in the movie, we learn that the purpose of The One is to enter the source and disseminate his Oneness to the rest of the Matrix, while the city of Zion is systematically genocided. Before he goes, he gets to choose some number (20?) seed humans to begin repopulating the next iteration of Zion if the cycle continues.

Is the reason that there are no young people on the council that they are the original seeds? Is Councilor Hamann in on it? Does he know about the certainty of the incoming genocide? It might give some color to some of his rationalizing talk about human-machine codependency.

It seems highly unlikely. All good evidence is that the current iteration of Zion is circa one hundred years old. Even assuming that the amount of time it took for The One to found/locate Zion after releasing the "seeds" was negligible, no-one on the council is anywhere near that old. 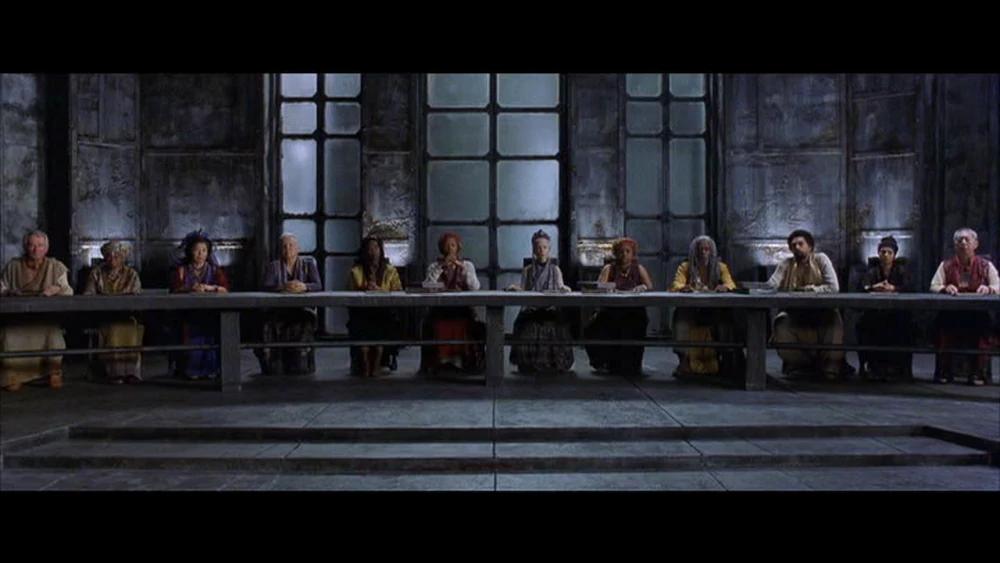 More likely the reason there are no young men on the council is because the obvious younger candidates for those leadership roles (Locke, Morpheus, etc) are mostly working as captains of the various hoverships or actively engaged in the defence of the city rather than sitting around making internal policy about how many showers citizens can take per week.

When Neo meets the Architect in The Matrix Reloaded, part of their exchange is the following:

TV Neos: Ones before me? What are you talking about?

Neo: There are only two possible explanations, either no one told me, or no one knows.

As Neo notes, the only way he doesn't know about the cycles is if someone kept quiet who did know, or people didn't know. It's obvious, when you see the scene, that he rejects the idea that someone in Zion knew and kept it secret, or even could keep it secret. Thus, they must not know.

There's also the way it was written. It's pretty stereotypical that when a character is presenting two possibilities, and they're being serious, the one they believe is the truth is what they give second. That's why in detective fiction you'll often see something like:

"It's possible that Bob died of natural causes. Or he could have been murdered."

You know the second one is what the person believes. In the case of the Matrix, the second option is the "No one knows" possibility.

Thus, overall, the clear implication is that no one in Zion (ie, no human at all) is aware of the cycle until Neo is told.

14
Why do the machines allow/initiate the building of a new Zion?
23
How does Zion population square with how it's built?
16
What is the Zion Foundation?
67
What was the purpose of having Zion?
10
Is Zion really the last human city?
12
How did the population of Zion feed itself?
26
Why not enter the Matrix from Zion?
5
What was Smith's plan to take over Zion?
3
Why people of Zion have been oblivious of fate of the previous Zion?