Are there insects or spiders on Voyager?

At the end of "Homestead," as Neelix is preparing to permanently leave the ship, Tuvok stops him. Before he's able to speak, Tuvok looks down and grinds his foot into the ground for a few seconds. Is he smashing a bug?

This is but one piece of circumstantial evidence. There may be more, but I'm unsure of them presently.

Yes, there are insects on Voyager. They are "Spawn Beetles" used in the Hydroponics Bay for pollinating flowers.

Kes chows down on a handful in the episode Elogium, where she's in breeding frenzy. 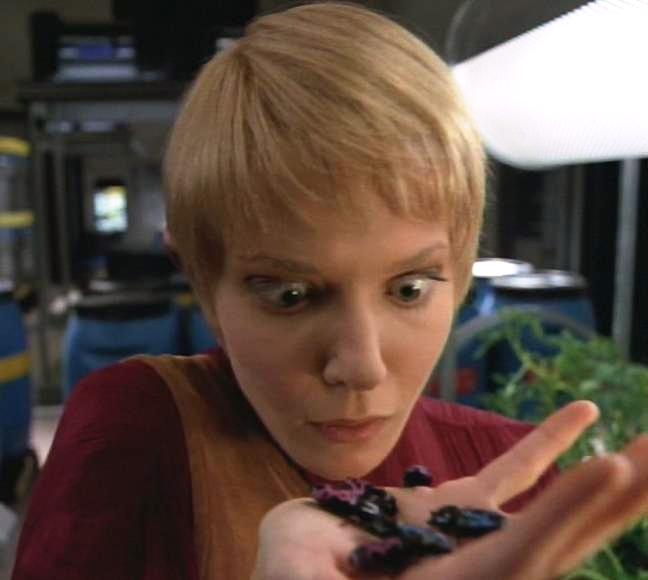 The scene you're describing is a follow up to this exchange at the beginning of the episode.

NEELIX: And now, for some more of Zefram Cochrane's favourite music. Hey, come on, Mister Vulcan.
TUVOK: Vulcans do not dance.
NEELIX: But it's tradition.
TUVOK: There is no tradition, Mister Neelix. This ceremony is entirely your invention.
JANEWAY: This is an official ship function, Commander. Don't make me order you to dance.

Later, when Neelix is leaving, Tuvok is doing a little mini twist (the dance) to show Neelix that he respects him and will miss him by putting himself out and to some degree embarrassing himself by dancing.

So.... bottom line, that particular scene is no evidence of whether there are insects on Voyager.

Photonic fleas were tiny flying insects native to the Delta Quadrant. They built flimsy webs and fed on plasma particles.

A mating pair of photonic fleas were inadvertently brought aboard the USS Voyager in 2376 within a shipment of amber spice. The insects nested near a plasma conduit, causing a momentary loss of sensor resolution whenever they tapped into the conduit for nourishment. They were moved to a safe location after their discovery. (VOY: "The Voyager Conspiracy")

5
Voyager episode Endgame - Future Janeway
12
Which USS Voyager is the real USS Voyager?
9
Did Voyager actually trade technology?
23
Are there insects aboard the Enterprise-D?
2
How many Voyager crewmen die?
6
Are there bathrooms on Voyager?
8
Are shields always up on Voyager?
3
Why didn't the Voyager crew take the shortcut in Prime Factors, abandoning the ship?
22
Why didn't Kes send Voyager home?