I read this book back in the early 90s. I think the cover had a pale tan/peach color background, with two people on the cover, both with eyes that were glowing, or at least solid white.

It was called something like "The Perseus Factor". I only remember some snippets from it:

His first novel, The Perseus Breed, combined a science fiction story-line with strong mystery genre elements. In the book, Borley Share’s obsessive quest to understand the sudden disappearance of his first serious girlfriend uncovers the existence of an alien race using the Earth as a nursery to raise its young. 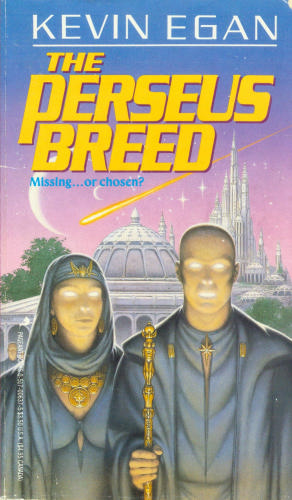 4
Novel from the 80's about aliens taking over earth and human resistance
12
Seeking novel about aliens who conquer and occupy Earth and forbid technological progress
8
Book about a woman meeting an alien prince, with whom she has a son who then has to escape aliens trying to kill him
18
Old SF novel about a white-haired young woman, alien or half-alien, who tutors human kids
18
Space fantasy novel - Human king, alien prince, telepathic plant-human hybrids
4
Mid 80s movie about 3 mute aliens and telepathic woman
7
Book about telepathic atmosphere-dwelling Aliens whose star is going nova
6
Sci-Fi novel. Near Future, Aliens, Brain Implant, Resurrection, Explore the Stars
7
Space novel (trilogy?) with a ship trading with aliens