Which Stargate address is shown on the Stargate plans?

We know from the Stargate: The Ark of Truth that the Stargate was invented by an Ancient/Alteran named Amelius.

In the movie we see the schematics/plans for a device that looks like a Stargate: 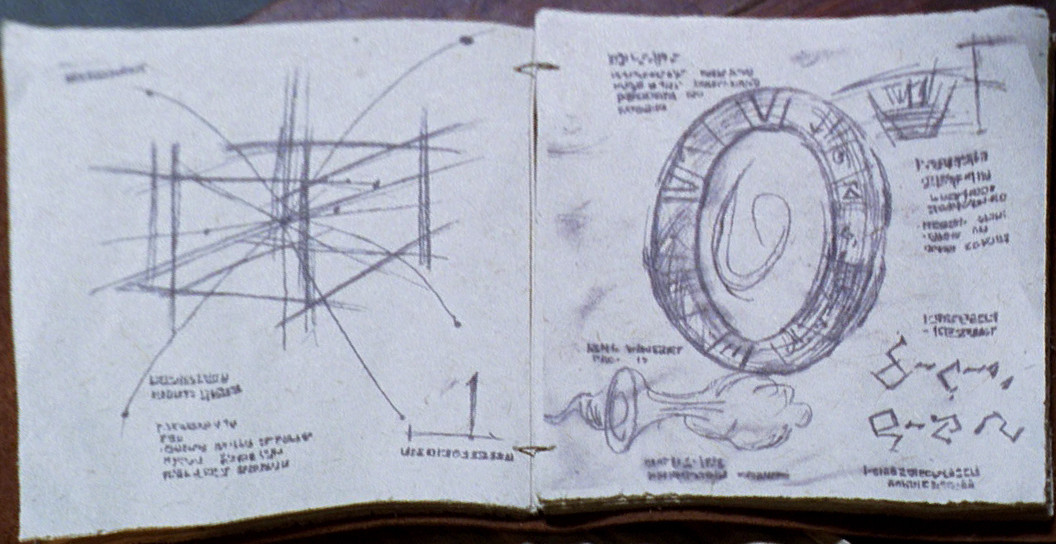 The bottom-right part looks like a six symbol gate address (with some styled hyphens between). Is it a Stargate address? Or just symbols of constellations? Or anything else?

Before we start looking at these symbols, we need to first understand the principles that govern the symbols used on the Stargates.

Using the reference of gate symbols that we know, while there are several similarities, a 1:1 correspondence between these known Milky Way symbols and the glyphs in Amelius' book is not possible without a lot of fudging. Of course none of the Atlantis glyphs match and neither do the Destiny glyphs (which are not constellations). I think we can therefore assume that these glyphs represent constellations from Amelius' home galaxy.

With fudging, it's possible to draw connections to Cetus, Aries or Leo (your "styled hyphens"), Aquila or Microscopium, and Cancer or Sextans (or Hydra and Norma) on the first line. But this is only 4 (or 5) symbols so it's unlikely that each line represents a unique address. And since several symbols would be duplicated between the two lines (notably the first and second symbols) it's unlikely that both lines represent a single address.

So what was Amelius doing when he wrote these symbols? Well that's purely conjecture.

13
What Does the "Point of Origin" Symbol Actually Do?
13
Why Would the Wall on Abydos Have Coordinates Instead of Stargate IDs?
13
Why did the Stargate cover stones have the gate address to Abydos on them?
13
Stargate - Destiny's Gate Address from Icarus base
4
Beta Gate Point of Origin Glyph
7
Is it impossible for Earth Stargate be modded to dial all Stargates?
12
Are any of the hieroglyphs, runes, etc. appearing in Stargate intelligible/meaningful?
3
How do the SGC address codes work?