An anime (magical girl?) episode where they each have to play a different game but lose?

I have a memory of watching an episode of what looked like a magical girl anime.

I remember there being five magical girls, each a different color. In the episode, they were all lined up on a stage in a sort of V-shape. They also were all in tall glass tubes. I don’t remember if they were in the tubes to begin with or if they ended up there after playing the game.

Each magical girl had to play a different game. The ones I remember are a game of whack-a-mole and a game of soccer (it could have been another sport but I’m pretty sure it was soccer). However, the games were stacked against them, and they kept losing. Every time one would lose I think they would get trapped in a tube. I believe that they all ended up losing and then there was a weird evil joker-circus guy who stood in the middle of the stage and laughed.

This is all I remember, and I don’t know any more about this anime. Can anyone identify this?

This is Yes! PreCure 5 GoGo!, sequel to Yes! PreCure 5, and part of the Pretty Cure magical girl franchise - specifically, episodes 36 and 37.

There are 5 Cures (hence the name, although there is a 6th technically-not-a-Cure who is otherwise preoccupied during this episode), all different colors: 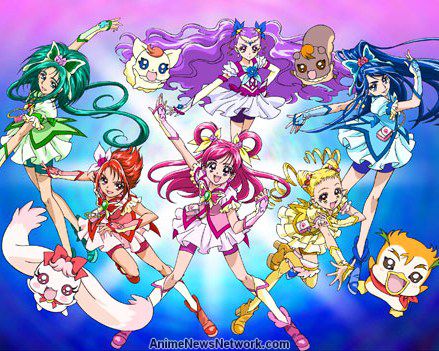 In episode 36, one of them, Rin (AKA Cure Rouge), has to play a soccer-based game:

He chooses Rin to go first and explains the rules of "Soccer Hero" to her, stating that she has to get one-hundred points within five tries. As Rin tries to kick the soccer balls, the goal moves. She slowly grows annoyed, then into full-on rage mode after the goal continues dodging. She gets angry enough to kick two balls at the goal, which both miss- but with her final ball she focuses her entirety on it; only for the goal to grab it with its hands. Angry she transforms into Cure Rouge and uses Fire Strike to send the balls at the goal, but it continues throwng them back. The goal uses its net and throws Rouge into a box.

And in episode 37, Urara (AKA Cure Lemonade) must play a game of whack-a-mole

Mr. Magic says it isn't of any importance and laughs before he puts her into the game, "Rhythm Whack-a-Mole". Here, Urara must hit the moles while her song plays, and keep whacking them until it ends; and if she misses even one it will stop. Everything goes pretty well for Urara until one of the moles steals the hammer from her, causing the game to end. She transforms into Cure Lemonade after they begin attacking her, but she is grabbed and thrown into a box like the others.

And here's a screenshot showing the stage and the villain (close to how you described him - not a clown per se, more of a ringmaster): 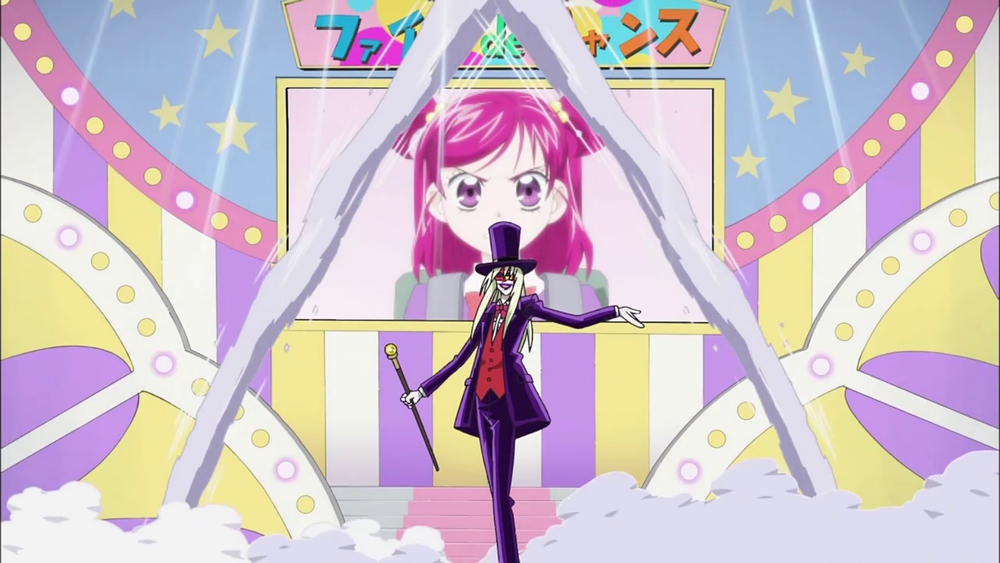 3
Looking for Anime with a prince faking being mentally handicapped hiding a giant mech suit wreaking havoc
4
90s/2000s anime/cartoon with a boy, a girl, and a robot looking for seven gems to prevent the planet from blowing up
7
Anime episode with duel/fight sequence where villain blows light and heavy bubbles, mentor interferes, goes to hell and takes villain with him
8
Anime about boy & summoning monsters
7
Anime short about two girls shooting each other with guns from their mouths
4
Anime with a ship in a sky and people with abilities/powers fighting
3
Anime where a kid has a small humanoid magical companion who has a round shape and wings