Can the Night King walk through wildfire?

White Walkers can be eliminated by using fire. However, there are some cases that happened (in the series), where the Night King either walked right through it or the radiance of their coldness are far superior than the dragon fire's strength. (I have no idea whether a dragon's fire is just a normal fire).

Wildfire has been used to defeat Stannis and his alliances when he invaded King's Landing. Wildfire caused explosions that burned Stannis' fleet. Wildfire even surpassed a normal fire since its strength cannot be diminished by the water.

With the level a Wildfire has, is the Night King still able to walk through it? As far as I know, Wildfire can cause worse damages than normal fire.

Note: I haven't read the books yet. 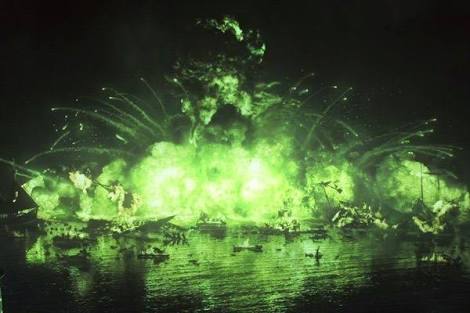 There are three types of fire in Game of Thrones and in order of least to most powerful they are:

From those three, we've only seen the White Walkers interact with one of the types of fire: fire. Here the fire parted around them to let them pass, how this happens is speculation but probably because "They bring the cold with them". See the below image from Season 6 Episode 5, "The Door". 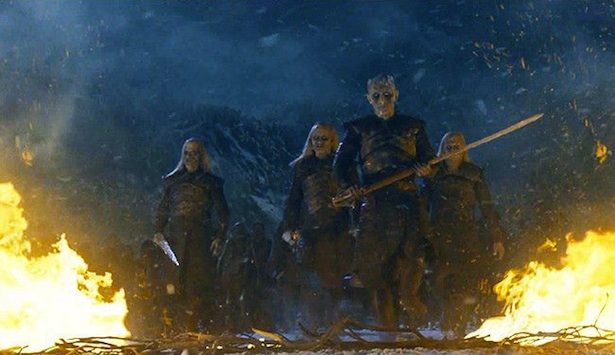 I believe a similar image is shown in Season 7 Episode 6, "Beyond the Wall", when the Night King and some White Walkers have fire around them.

On the other end of the spectrum we have dragon fire, this is speculated to be able to kill White Walkers but as of yet we have not seen that happen. It is speculated because of dragon glass, or obsidian, which has been known to kill them, see my related answer here.

Lastly, we have wildfire which I don't think has been seen to interact with White Walkers and even their wights. It is a mix between the two though probably closer to normal fire than dragon fire. I would speculate that it would not kill them but that is just speculation on my part and we are likely to know more in Season 8

now that the White Walkers have broken through the Wall and man is going to throw everything they have at them.

On a side note the following statement of your is incorrect, we have only seen fire, and dragon fire for that matter, kill wights but not White Walkers.

White Walkers can be eliminated by using fire.

33
What is the difference between a wight and an Other?
33
Can Bran Stark control dragons?
15
What weapons can kill White Walkers?

14
Could wildfire burn Daenerys Targaryen?
18
Why would Bran Stark use ravens to spy on the Night King?
29
Would the Night King have been able to succeed on his own?
6
Why are the Night King and his minions advancing now versus later in winter?
12
Why didn't the other White Walkers hear or see that character approaching the Night King?
4
What would have happened if the Night King were stabbed by dragonglass?
29
What was Bran's plan to kill the Night King?