fantasy story collection from 1982 or earlier

A collection of fantasy stories, multiple authors, I read it in 1982. Thick book, I think paperback, cover art possibly light blue. I think the book had "fantasy" in the title, I don't think it was a "best of", nor do I remember any famous names associated with it.

I remember something about two stories from it:

My google skills have failed me. Anybody recognize this?

The first story sounds like "Yesterday Was Monday", a short story by Theodore Sturgeon, which was also the answer to this old question (among others). It was first published in Unknown Fantasy Fiction, June 1941, available at the Internet Archive.

Harry sat down on a grease drum and wrinkled up his brains with the effort he was making. "You mean that this time proposition ain't something that moves along? Sorta—well, like a road. A road don't go no place—You just go places along it. Is that it?"

"That's the general idea. In fact, that's a pretty good example. Suppose we say that it's a road; a highway built of paving blocks. Each block is a day; the actors move along it, and go through day after day. And our job here—mine and the little men—is to . . . well, pave that road. This is the clean-up gang here. They are fixing up the last little details, so that everything will be ready for the actors."

The second story was identified in Mark Mills's answer as "One Ordinary Day, with Peanuts", a short story by Shirley Jackson. It was first published in The Magazine of Fantasy and Science Fiction, January 1955, available at the Internet Archive. In the following excerpt, Mr. Johnson has just come home after spending his day being pleasant and kind to people:

Mrs. Johnson came out of the kitchen and kissed him; she was a comfortable woman, and smiling as Mr. Johnson smiled. "Hard day?" she asked.

"Fine," she said. "I had a little nap this afternoon, took it easy most of the day. Went into a department store this morning and accused the woman next to me of shoplifting, and had the store detective pick her up. Sent three dogs to the pound—you know, the usual thing. Oh, and listen," she added, remembering.

"Well," she said, "I got onto a bus and asked the driver for a transfer, and when he helped someone else first I said that he was impertinent, and quarreled with him. And then I said why wasn't he in the army, and I said it loud enough for everyone to hear, and I took his number and I turned in a complaint. Probably got him fired."

"Fine," said Mr. Johnson. "But you do look tired. Want to change over tomorrow?"

Both stories appeared in A Treasury of Modern Fantasy, a thick (xvii+588 pages) trade paperback anthology edited by Martin Harry Greenberg and Terry Carr and published in 1981. I believe that's the book you are looking for. 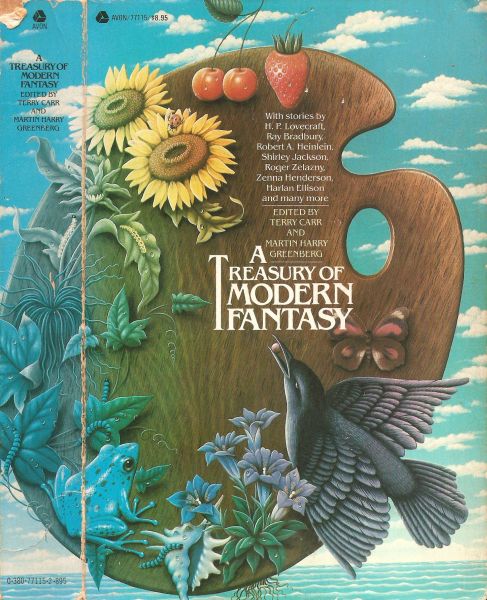 The second story is "One Ordinary Day with Peanuts" by Shirley Jackson. It has appeared in many anthologies but I hope this can help track down your specific book.

8
Fantasy novel about a warrior who battles a 'king' with the help of a magician
12
90's teen fiction - UK town shrouded in mist/fog causing violence
9
Collection of “New Fairy Tales” from early to mid 90s
8
Fantasy short story collection with giant murderous bird, a man who dies and returns as a woman and everyone wearing Egyptian style jewellery
14
Death of a skin changer: what short story is this?
12
YA sci-fi/fantasy story collection (most notable story being about a dinosaur-possessed crane)
5
Collection of horror stories: Girl gets cursed, mind-reading ring; man dreams of old woman in tower