Are there Kryptonians on Prime Earth and does/did New Krypton exist there?

Note: Don't spoil anything past the Superman Reborn crossover.

I've been reading Superman, Action Comics, and a little bit of Batman and just thought of something.

I was surprised when I looked up New Krypton to see what had happened to it during The New 52 but found that the whole arc took place on New Earth and was Pre-New 52. So, when I looked up the DC Wikia page about it on Prime Earth, it did not exist!

So, here's my question: is it known if New Krypton does/did or doesn't exist on Prime Earth?

There are both Kryptonians and a "New Krypton" on Prime Earth.

There are a few Kryptonians (I count 14) that have made appearances, including:

Revealed after the 4 part cross-over in March of 2017, the New Krypton on Prime Earth is called Jekuul.

A planet conquered by Zod, that he makes his home. It is called "New Krypton" for the first time in Action Comics #996 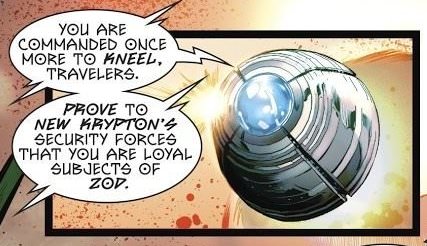 In the next panel the planet is identified as Jekuul.

Not the answer you're looking for? Browse other questions tagged dc superman dc-rebirth new-krypton-saga or ask your own question.

10
Was Smallville (the show) ever considered canon in the DC universe
6
Why did Superman & Supergirl start to suffocate instantly when Luthor made our yellow Sun red?
4
Did Kryptonians own any other planet or had at least a major functional colony out there?
6
Where does the new 52 start?
2
Do Kryptonians know about the effect of yellow suns and how did they use it?
6
In the New 52 Multiverse, are there multiple Apokolips/New Genesis?
5
Does Superman have a higher IQ on Earth than he would have on Krypton?
7
How did Superman get his electrical powers in Superman Blue?