Are there any Forbidden Planet storyline derivatives?

The sci-fi movie Forbidden Planet from 1956 was exceptional. The special effects team were nominated for the Academy Award for Best Visual Effects at the 29th Academy Awards. The sound track was the first one produced completely electronically. In 2013, the picture was entered into the Library of Congress' National Film Registry, being deemed "culturally, historically, or aesthetically significant". Two of my favourite scenes were the view down the power station's core from the gangway, and the land speeder seen in the distance. They rival anything Star Wars did in 1979.

For such a masterpiece, were there any derivative works, or even a movie based loosely on possible future plot directions?

I find it remarkable that in a world of remakes, re-dos, sequels and prequels, that nothing has been done with this movie's story line since?

Forbidden Planet is indeed a real masterpiece, and one of the strongest impressions that I had when watching it for the first time was: "This movie looks like it's a Star Trek long and detailed episode".

Some later research, revealed that Gene Roddenberry was indeed inspired also by Forbidden Planet when he created Star Trek; even Wikipedia reports this:

In the authorized biography of Star Trek creator Gene Roddenberry, Roddenberry notes that Forbidden Planet "was one of [his] inspirations for Star Trek"

I also suggest you to read this article (whose title is self-explanatory): The Influence of Forbidden Planet on Star Trek and Star Wars. Here are the parts of this article that talk about Star Trek:

At any rate, the crew's interactions aboard the C-57D are remarkably akin to Star Trek, which made its debut on American television in 1966; Leslie Nielsen's somewhat self-regarding performance as Commander Adams could also be seen as a precursor to William Shatner's Captain Kirk, and as Star Trek Fact Check notes, Adams’ relationship with Dr Ostrow is similar to that of Kirk and McCoy.
There are other similarities between Forbidden Planet and Star Trek, too. The exploration of an unknown world in a faster-than-light ship. The tendency to explain things scientifically rather than fantastically. Most of all, Star Trek shares Forbidden Planet’s fusion of pulp sci-fi and influences from elsewhere in literature; indeed, a far-future updating of Shakespeare’s The Tempest is just the kind of thing Star Trek would do throughout its long run. The Star Trek episode "Catspaw" reworked elements of Macbeth, while other episodes in both the original series and The Next Generation either borrowed from the Bard for their titles or made reference to his work in the episodes themselves (“Dagger Of The Mind,” “All Our Yesterdays”, “Sins Of The Father” and so on).

As Ty Hays mentions above, Return to the Forbidden Planet is technically a sequel to it. When I first saw it, it was done as Musical Theater at a local community college, and it looks like it was always meant to be something similar – it was billed as 'Shakespeare's forgotten rock and roll masterpiece.' 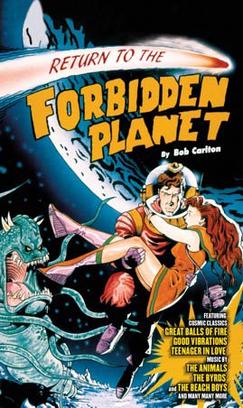 It's not a sequel, but there is an excellent novelization of the movie. It was written by Philip MacDonald (normally a writer of mystery fiction, as well as the grandson of the eminent fantasy writer George MacDonald), under a pseudonym W. J. Stuart. I found it to be quite good, fleshing out a number of plot points, including character motivations, as well as Morbius's and Altaira's abilities.

Shortly before the film was released, a novelization appeared in hardcover and then later in mass-market paperback... which chapters the novel into separate first person narrations by Dr. Ostrow, Commander Adams, and Dr. Morbius. The novel delves further into the mysteries of the vanished Krell and Morbius' relationship to them. In the novel, he repeatedly exposes himself to the Krell's manifestation machine, which (as suggested in the film) boosts his brain power far beyond normal human intelligence. Unfortunately, Morbius retains enough of his imperfect human nature to be afflicted with hubris and a contempt for humanity. Not recognizing his own base primitive drives and limitations proves to be Morbius' downfall, as it had for the extinct Krell. While not stated explicitly in the film... the novelization compared Altaira's ability to tame the tiger (until her sexual awakening with Commander Adams) to the medieval myth of a unicorn being tamable only by a virgin.

The novel also includes an element never included in the film: when Dr. Ostrow dissects one of the dead Earth-type animals, he discovers that its internal structure precludes it from ever having been alive in the normal biological sense. The tiger, deer, and monkey are all conscious creations by Dr. Morbius using the great machine as companions ("pets") for his daughter and only outwardly resemble their Earth counterparts. Since the Krell's Great Machine can project matter "in any form" it has the power to create life. Thus, the Krell's self-destruction can be interpreted by the reader as a cosmic punishment for misappropriating the life-creating power of the universe. This is why Commander Adams says in his speech to Altaira "... we are, after all, not God".

About the nearest thing to a derivative is The Invisible Boy (1958), in which Robbie the Robot features. However, it is set in the 20C, and I'm not too sure how he is supposed to have got back in time.

In the end Robbie saves the boy from the schemes of a megalomaniac computer which has learned to think for itself and iirc seeks world domination.

Of course there are some purists who might claim that there is no 100 percent certain proof that The Forbidden Planet and The Invisible Boy are in the same series, but there are probably millions of people who believe that those two movies are part of the same series.

As K-H-W says in his answer there is a stage play Return to the Forbidden Planet which is said to be a sequel, though how people can return to an exploded planet is beyond me.

And as Buzz said in his answer there is a novelization of The Forbidden Planet written by Philip MacDonald under the name of W.J. Stuart.

And a number of people have tried to make remakes, reboots, sequels, and prequels of The Forbidden Planet, and there could have been story outlines and scripts written for such projects which someone might be able to read somewhere.

And as far as I know that is just about everything that exists in the same fictional universe as The Forbidden Planet (1956) at the present time.

A lot of the props from The Forbidden Planet (1956) were used in other science fiction and fantasy productions.

The original Robby the Robot costume has been used in many movies and television episodes, as have copies of it.

I believe that Forbidden Planet uniforms have been reused in other movies and TV shows.

Not the answer you're looking for? Browse other questions tagged story-identification sequel forbidden-planet or ask your own question.

5
How does the id monster in Forbidden Planet penetrate the defenses?
9
Is there any discussion of a Back to the Future sequel or remake?
6
Seeking a story about a forbidden planet with a genetic virus
15
Who is the actress in this "Forbidden Planet" lobby card?
7
Morbius speaks of a realignment in "Forbidden Planet"
15
Story where a man can recognize any place on any planet from a single image
2
Scene from Forbidden Planet where the monster kills Morbius
14
Looking for a story / novel. People speak in third person, emotions are forbidden