Why didn't the Jedi/Sith use Force pull/push in the generator complex?

When on the bridges/catwalks, why did neither the Jedi nor the Sith use the Force to push/pull their enemy to their death? The Jedi may have had a purpose, but why didn't the Sith use it?

Every Jedi Knight player would have done that! (Especially in a place like Nar Shaddaa streets.)

Furthermore, although I think this one is simply a bug in the movie, at one point, he even seems to step backwards to make some room for the Jedi jumping over his catwalk. 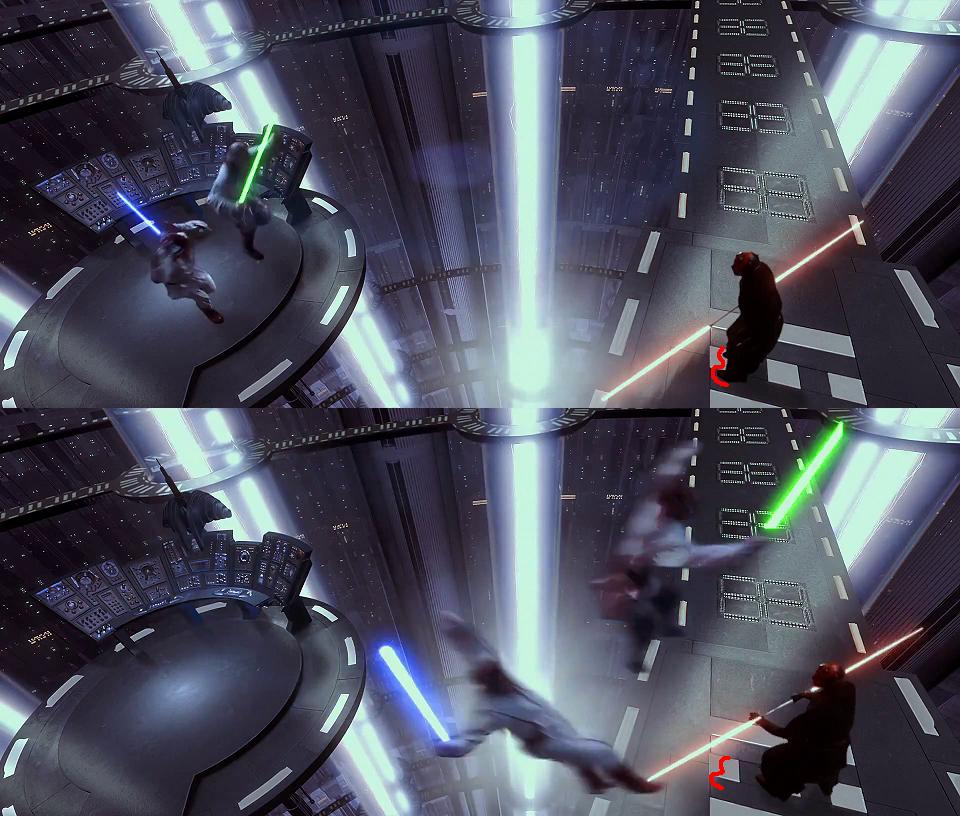 Even with or without this, is there any in-universe explanation why they didn't just use Force push/pull?

Because Jedi conflicts are not like players in a video game with a series of pre-programmed responses. Use of the Force for pushing or pulling opens a practitioner up to attack and as such is like any other technique; it must be used in just the right time and place in battle.

In a place filled with catwalks, both Jedi and Sith would watch closely for such an attack and expect to try to counter it with their own techniques. It is not made clear as viewers of invisible Force combat whether two Force pushes or pulls can be deflected or canceled out.

If so, that would explain why you would rarely see that as an opening move between two Jedi. When Jedi Force pushes an enemy, that enemy is usually already off balance or not expecting such an attack.

You can watch a battle between two Force-users and you can see how each sets up for the use of Force pushing. A battle between the two Force Users starts at the 2:40 mark (but entire video is awesome).

I would add to Thaddeus's answer above that we have seen two Force combatants using Force push in a duel. In the battle between Anakin and Obi-Wan at Mustafar, we see the two try to Force push each other at the same moment. It appears to take a large amount of concentration to counter the incoming Force attack and try to push their own. (I am uncertain if, with the Force, it acts the same as physics where the forces would be pushing "against" each other) They both go flying back from the attack.

It should also be noted that at the time of The Phantom Menace, Obi-Wan is not even a Jedi Knight yet (though by Qui-Gon's own words, he was ready for the trials). Neither Obi-Wan nor Qui-Gon were known for being particularly strong Force (power) users. Obi-Wan seemed to have a talent with a lightsaber and eventually becomes one of, if not the best practitioners of the defensive Soresu lightsaber style. Qui-Gon also displayed talent with a lightsaber, and a strong connection to the living Force, so it could have just been that both Jedi preferred to stick to their strengths.

And a final note, depending on which Star Wars video game you are referring to, some examples of Force use are extremely overblown, even in-universe. The Force Unleashed lead, Galen Marek, was trained as a strong Force user (relying less on his lightsaber combat abilities, though they were not insignificant) and was commented as being potentially one of the strongest Force users of all time. That's one reason why you can see him dashing down hallways, Force pushing any and everything off of ledges and out windows.

I'm not going to make a long and deep analysis. Just simple as this: If I were Darth Maul, I would have wanted to have fun with these Jedi before I kill them. After all, he says "At last they are going know about us." He wants to show his skills to Jedi. He wants them to fear him. Pushing them into the void is just not fun for a Sith imo.

The only explanation for situations like this is going to be out-of-universe. This is because the way fictional fight scenes are constructed is governed by what audiences, primarily seeking entertainment and indoctrinated in conventional morality, will tolerate from their heroes.

In my opinion, the Jedi Knight games are poor references in this case. In those games, as in the The Force Unleashed games, Force Push is a satisfactory game element. They were designed to be fun, not realistic. Think of the sabre combat in those games; both you and the enemy gets hit by direct lightsaber strikes multiple times. In the 'real' world, even a small and brief contact with a lightsaber's enery beam has the potential to end the fight, look at Obi Wan being hit in the arm in Attack Of The Clones.

Both Jedi and Sith are taught very early on to defend themselves against attacks through the Force. For example, have you tried using Force Push against the Jedi bosses in The Force Unleashed? If you have, you'd know that Force Push is pretty useless, even though arguably being the best way of attacking enemies in the rest of the game. You just waste 'Force Points'. Using the Force requires concentration, even in calm circumstances. Imagine then, trying to gather the strength when engaged in deadly combat where a tiny mistake can lead to your death. Even if you could, if your enemy successfully protects himself (which he should), you just wasted energy.

But, are you sure Darth Maul doesn't try?

. A brief pause in the fight ends with Obi Wan looking like he's been hit in the head, and Qui Gon seizing the opportunity to lunge forward. Couldn't this be an attempt from Maul to push Obi Wan off the platform? This would go along fine with my earlier points, Obi Wan could defend himself and Qui Gon realized that such an attack would leave him vulnerable.

The screenshot you provided is right after that event, Darth Maul could simply have realized that another Force Push attempt would at most kill one of the Jedi, and then he'd have nowhere else to back off to and the other would incapacitate him.

And finally, Darth Maul does!

At the end of the fight, when Obi Wan is blinded with grief and (..anger?), he is not as calm and composed as he should be, and he is unable to defend himself against the Push that almost had him falling to his death.

Not the answer you're looking for? Browse other questions tagged star-wars jedi the-force sith the-phantom-menace or ask your own question.

3
Jedi/Sith using force in combat with other Jedi/Sith?
0
Why don't Jedi simply fight using the Force instead of the more cumbersome lightsaber?
21
Why don't Jedi (or Sith) use the Force to snap their foes' necks?
16
Why didn't Obi-Wan use The Force?
16
Why doesn't Kylo Ren simply Force Push his way to victory?
15
When multiple Jedi attack one target, why do they all attack physically?
3
Why doesn’t Obi-Wan Kenobi use the Force more?

21
Why don't Jedi (or Sith) use the Force to snap their foes' necks?
5
How much close control over physical objects is possible with the Force?
18
Could several Jedi peacefully overpower one Sith opponent through nonviolent Force techniques?
21
Why didn't the Jedi Council send a team of Jedi to go after General Grievous?
18
Why didn't Vader detect the Force in Leia?
15
Has any other Dark Jedi or Sith said that they felt the "pull to the light"?
10
Why the Jedi or Darth Vader don't use the Force powers in space fights?