I am looking for a book I read about 10 years ago. It was an eBook, and I believe the cover picture was very purple.

The basic premise of the story was there was a man on trial in a rural town, for killing his fiancee by convincing her to take a black market drug with him. The drug was designed to cause a sexual frenzy that was only appeased by having sex with the one you love. He was in love with his fiancee, but she wasn't actually in love with him, so she died.

A special judge drops by during the case, who has powers granted by the gods (I think?), his eyes are purple, and he travels on a train with two or three other people who are his retainers and friends. He goes into a trance when hearing evidence (I think?), then pronounces judgement, because he is this special kind of judge, his word is law. He pronounces the man not guilty due to it actually being the woman who gave them both the drug, and not the man.

The man travels with them until they get to their destination, then gets hired somewhere as a guard (I think?). He slowly falls in love with the judge over the course of the book, and ends up saving the judge's life when he gets dosed with the sex drug, and finds out then that the judge loves him back.

Rynn made a mistake in taking the drug hextasy with his fiancée. It was supposed to be the ultimate sexual high, except that you have to sleep with the one you desire most. If you don't, your body won't be satisfied and you'll die. Rynn lived, Lynnette didn't, and now her parents want someone to pay. Either luck or Surseine, the god of justice Himself, takes pity on Rynn by putting his trial in front of one of His judges. Sursei are graced by the god they represent with the power to see truth and Sursei Shasertai finds Rynn innocent of murder.

But the drug is still out there and Shasertai and the people who travel with him are determined to root out the drug lord responsible for its existence. Shas invites Rynn to join them. He goes willingly, fascinated by the judge who gave him a second chance at life.

Rynn might be innocent and straight, but Shas isn't. He's gay, happily so, and very much drawn to the farm boy whose simple innocence is a balm to one who can hear through the lies. What he hears is that Rynn's not gay, so he vows not to get involved. Until another drug, another time, gets in the way...and then he and Rynn will have to deal with the each other's truths and their growing attraction.

The cover art also contains quite a bit of purple. 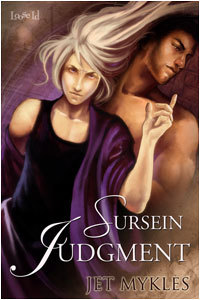