It was a short story, and I think it was featured on Escape Pod or one of the other sci-fi podcasts, but I can't find it in their archives.

What I remember of the story:
A man is attending a scientific symposium to talk about his time travel discovery, but his hotel starts on fire and he is trapped in his room.

At first he tries to use his time machine to escape or keep the fire from being started (I think it was arson?) but because of the nature of time travel as soon as he gets back to the time period at which the machine was activated everything reverts, and he finds that he is unable to change anything.

So he decides that since he is probably going to die, and he can't change the past, he might as well use the time machine to see history. So he explores a few notable points in history, one of which was the crucifixion of Jesus, but is attacked and hamstrung by Roman soldiers and never makes it there, choosing to return to the present, at which point his body is whole, as nothing that happens in the machine matters once it is turned off. Everything returns to exactly the way it was.

Then he travels to the recent past, maybe the 60's, where he meets a girl, lives with her, and spends several decades up to the present just living his life, and then doing it over and over again with different variations every time he catches up to the present.

I think the title had something to do with a philosophical sea where all changes disappear.

I believe that the story is "Ripples in the Dirac Sea" by Geoffrey Landis.

A very powerful story, not without similarities to Replay but more tragic as, wherever he goes in time, he always has to return to the fire which will kill him.

Covers can be seen on isfdb here. 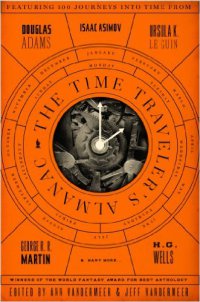