Which comic book super villain was the first to match wits against a different super hero?

Some bad guys are associated with a particular good guy, like Lex Luthor vs. Superman or the Joker vs. Batman. Who was the first comic book super villain to jump from the comic in which they were first featured (thereby excluding the super hero they normaly match wits with) to go up against a different super hero protagonist?

I'm not sure if it counts for your requirements, but one of the early crossovers of everyone (not just a single villain) was Reed Richards and Susan Storm's Wedding in 1965. Wikipedia has this to say about the storyline:

On the wedding day of Reed Richards and Susan Storm, Doctor Doom and an assembly of super villains (consisting of Attuma, Awesome Android, Beetle, Black Knight, Cobra, Diablo, Electro, Enchantress, Executioner, Grey Gargoyle, Human Top, some HYDRA agents, Kang the Conqueror, Mandarin, Melter, Mister Hyde, Mole Man, Porcupine, Puppet Master, Red Ghost and his Super Apes, Super-Skrull, and Unicorn) crash the wedding but are defeated by every super hero who was attending the wedding. This is the first time that almost every super character in the Marvel Universe at the time were gathered into one book (Fantastic Four Annual #3, November 1965).

The earliest villain i know of that switched hero was Emil Cullen, aka The Python 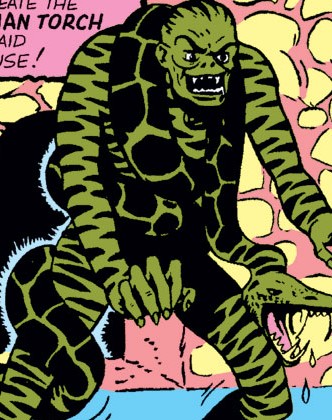 The Python was an early enemy of the golden age hero known as Angel. He first appeared in Sub-Mariner Comics #2 (1941) as a contortionist that was sent to kidnap scientists for Germany, this brought him in conflict with Angel who defeated him. The Python soon returned in Marvel Mystery Comics #25 (1941) looking for revenge, but was defeated by Angel again. 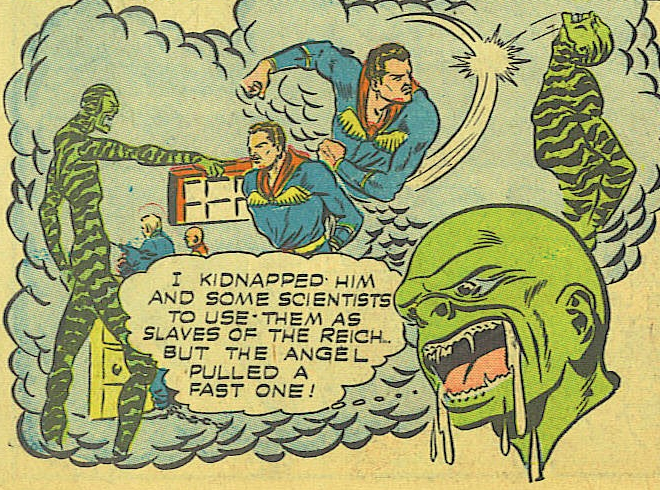 Next year, in Human Torch Comics #8 (1942) the Python was back with a new plan. This time he was after the android hero known as the first Human Torch and tried to kidnap professor Horton, the inventor that created the android. He succeed and after a long battle with the Human torch, using one of Horton's inventions, he gained control over the hero. With the Human Torch help the Python fought Namor but was defeated and killed.

There might have been earlier villains than him that switched hero, but since he debuted just three years after the beginning of the Golden age of comics i think he would have to be one of the first.

My vote for one of the earliest and most significant villains to escalate his conflict with other metahumans, would be Ra's Al Gul, the Demon's Head. He started entirely as a Batman villain in 1971, first appearing in Batman, Vol 1, No. 232 (1971). 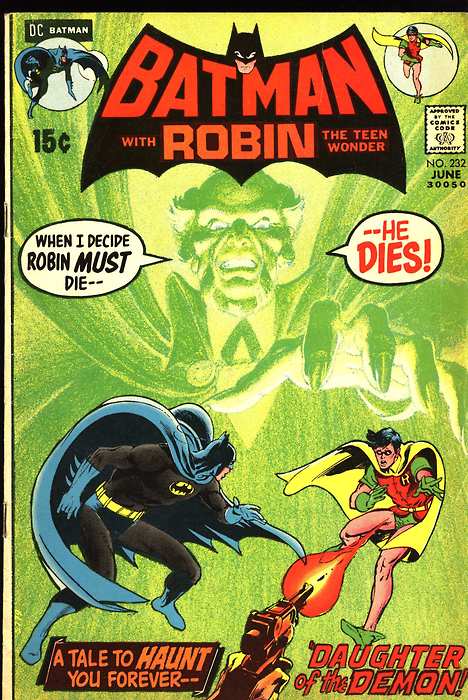 Over the years, Ra's would grow both in power and popularity in the DC Universe, he graduated to fighting Superman and eventually the entire Justice League in JLA 50, Tower of Babel. After Ra's conflict with the JLA, it destabilized the entire team and sowed mistrust (though Batman had something to do with that) enough that the League was forced to reveal their secret identities to each other. 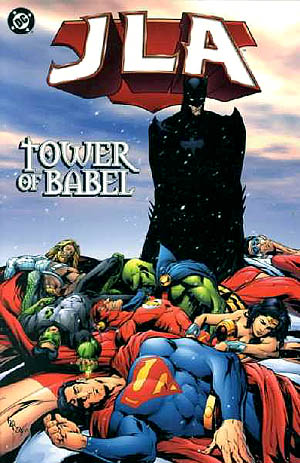 The first image is for Avengers #47 from 1967. Magneto dukes it out with Earth's Mightiest Heroes. 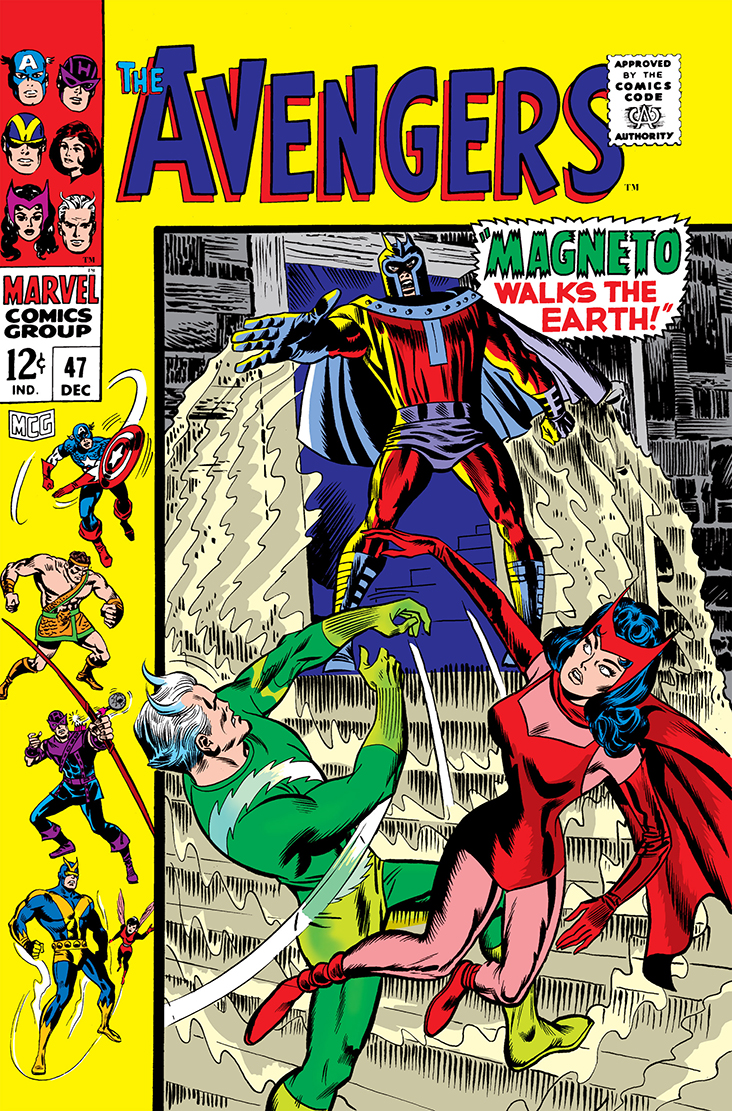 The second is a more viable contender to your question. That rascal Magneto challenges the God of Thunder in 1964. Journey into Mystery #109 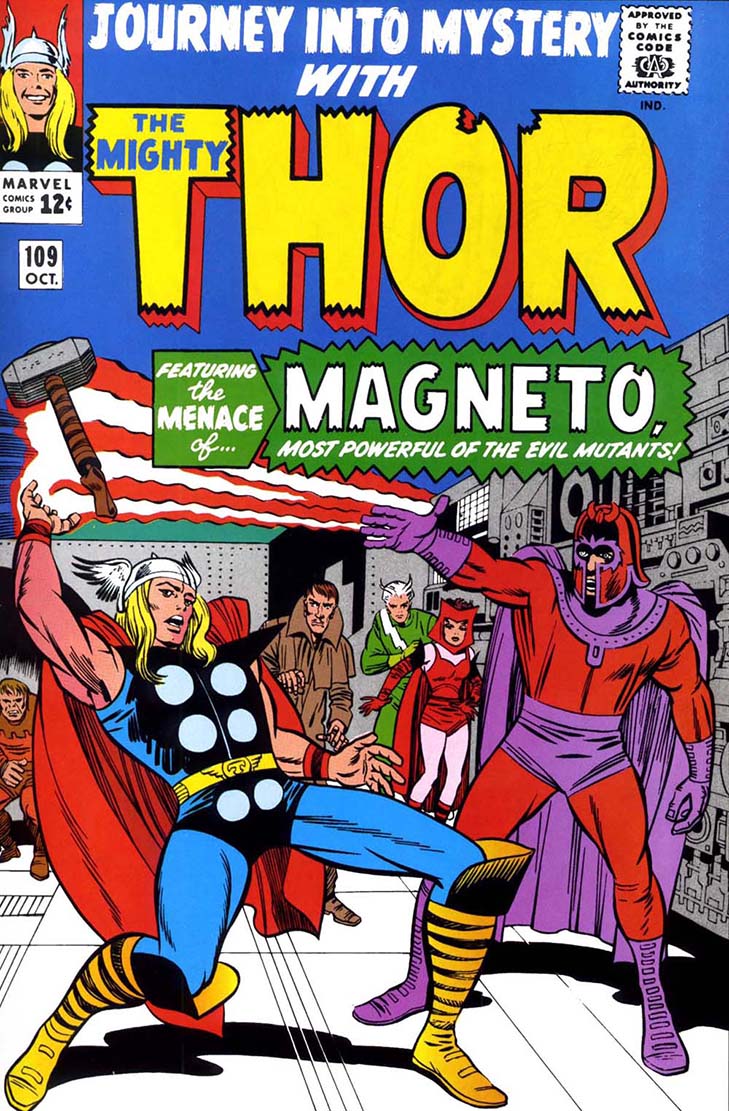 As DC was doing crossovers decades before Marvel comics were a thing, I'm betting it was in a DC comic.

While I can't give you the earliest example, I have a suspicion it might be an issue of World's Finest comics. Batman and Superman teamed up regularly in the book, and they'd often fight each other's villains, or fight one common villain. 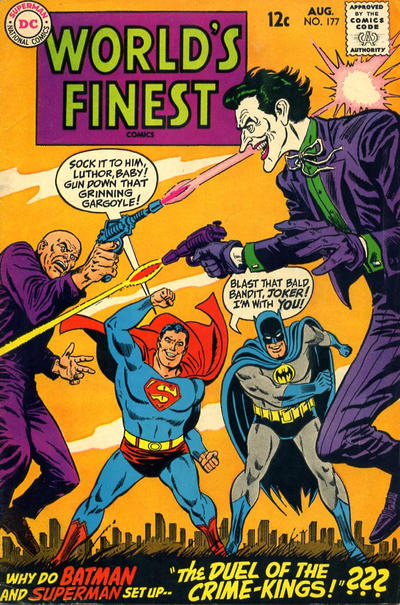 The one in DC who would most qualify is Darkseid. Although he first appeared in a cameo in a Jimmy Olsen comic in 1970, the appearance was used by Jack Kirby as a way to introduce characters for his Fourth World setting, where he was the main antagonist.

However, whenever people think of Darkseid now, he's primarily considered as Superman's archenemy.