I've been looking for a book for over ten years now on and off that I read and loved as a child but misplaced in a house move.

I'm not 100% sure of the title, but I believe it's called The Wizard of the Wood or Woods. I've been using that title to search many online databases over the years with increasing levels of frustration.

My book had an illustrated cover that looked (to my childish eyes) to belong in the 1970s or earlier.

It was an A5 paperback novel maybe just over a centimetre-and-a-half thick, and it was pretty well-worn.

I can't remember the main character's name but either he or the eventual antagonist was called Matt or Matthew.

The story follows an astronaut who is tasked with investigating the disappearance of a shuttle in the vicinity of a small forest planet. This poor man is dragged suddenly down to the surface of the planet as soon as he gets close, and after crash-landing in the middle of the forest, he realises that the planet's magnetic field caused his (and presumably the other pilot's) crash.

None of the instruments or equipment work - he can't even prise his weapon off the ground - which explains why the other pilot never made contact or sent out a distress signal.

However, there is a part of the ship which is a super-cooled metal rod which, with special gloves, our hero removes for use as a weapon.

Now stranded on this tiny forest planet, he is soon found and taken in by the local forest community, with whom he communicates through drawing pictures in a sand box until he learns their language.

The people he lives with are quite a weak tribe. There is some sort of tournament which involves staff-fighting in which the MC, for some reason, must compete. The strong tribe lives among hardwood trees, which is why they tend to win as their staffs don't break as easily. I think this may be when the MC goes back to fetch the metal rod, knowing it won't break against the hardwood. Plot ensues and the next thing I remember is that the MC is now travelling.

Along the road he meets a masked warrior woman (Thalia? Really don't remember her name sadly) who is eventually revealed to have a scarred face from an accident with her father's forge as a child, after which her mother took her away with her to the masked-women-warrior-group (or something) which she later left, for some reason. I think she's the love interest.

Also, the MC meets a boy called Thatch (named for the colour and texture of his hair) who's maybe twelve and lives in a coastal community of wooden houses on stilts.

At some point I think something is burned down and bad things start happening and it is eventually revealed that the other pilot survived his crash-landing as well and has set himself up as some sort of warlord/shaman/wizard (which is what everyone thought the MC was with his metal rod and weird gloves).

Other pilot has been plotting and raising an army, for some reason, and MC wants to stop him doing the Ultimate Bad Thing, whatever that is, and for some reason decides to set up a corral and get his friends to help him catch and train wild horses to give themselves the edge on the battlefield by having cavalry.

I can't remember how it ends (though obviously it ends well for the protagonists). Does anyone know what this is?

This is The Wizard of Woodworld by Garry Kilworth.

Woodworld is a 'lodestone world', a planet with a magnetic field so strong that it can pluck spaceships out of the sky. Which is exactly what happens to Maxy, the youngest cadet in the space fleet. Stranded on a planet where metal is useless and technology primitive, he can only wait and hope to be rescued.

Luckily, the Wudans who give Maxy shelter are friendly, peaceful people. But they have enemies, the warlike Credans and Masgarians, and when another Earthman comes to Woodworld and teaches the Masgarians how to make modern weapons, the Wudans seem doomed - unless Maxy can help them... 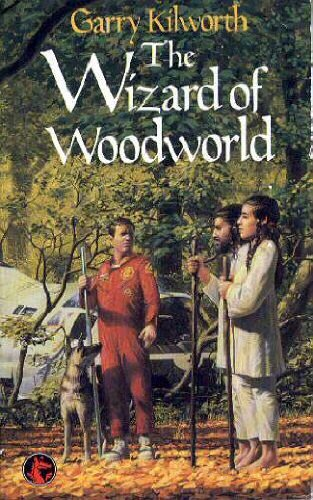 Not the answer you're looking for? Browse other questions tagged story-identification soft-sci-fi novella or ask your own question.

8
Fantasy novel about a warrior who battles a 'king' with the help of a magician
9
Young Adult book: rain forest girl leaves her tribe and finds they are all living in a huge dome
5
Kids illustrated book about being stranded on an alien planet with multiple choice questions
8
Young adult book about a boy(?) who gets sent through a portal to another world which is really the distant future
4
Children's book with a small green alien who has a metal umbrella as a spaceship
6
Book about a man who crashes on a planet and saves the princess with a magical weapon
21
Short story about an astronaut who comes back to earth and lives a few seconds in the future?
13
SF novella title - stardrive with an unexpected side effect
11
Book about a planet with three invented artificial languages