What are the reasons to consider the Merovingian 'very dangerous'?

In The Matrix Reloaded, we learn about the Merovingian from Grandma':

He's being held prisoner by a very dangerous program, one of the oldest of us. He is called the Merovingian.

Why is he a very dangerous program in general? Sure it complicates things that he has hold of the Keymaker and there is no much time to pinpoint the guy. But if it were just this, she could have said "there is a very dangerous situation". 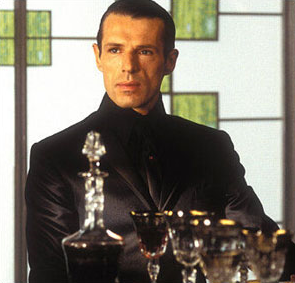 He also has hold of exiles, but why are they that dangerous? They doesn't seem to do much trouble in general, being on a leash so short that no one seems to know about their existence (except Agents and Oracle). Why are they a danger? It's like an old noble guy collecting antique weapons.

Also, the Agents must be superior to these beasts, if Niobe can deal with most of them, except the Twin ghosts who seem to be the most powerful. Morpheus and Trinity eventually take out both of them [temporarily]. Still, the Agents choose to follow the Keymaker simply because he is an "exile" over Trinity.

I don't think even this alone would make him that much feared.

It seems clear from the Oracle's wording that the Frenchman is a long-term badass (later supported by what we learn about him), a dangerous troublemaker or even one of the villains to both Zion and the Matrix. It's almost like she fears him.

His ability (and willingness) to create a program that can control a Bluepill could be potentially very powerful. According to Wikipedia, the Oracle says this was his initial purpose: a layer of control before the Machines came up with the illusion of choice and the cycle of The Ones.

(Note: I've been unable to find support for this in the movie transcripts, it's possible it's non-canonical or even just theory. The Oracle does say that he's "one of the oldest of us", and the ability to control Bluepills directly or indirectly would seem to match up with that purpose, but that's as good as I can do.)

We see a snippet of this ability -- the cake that the woman in the restaurant eats, along with her later behavior.

There is an entirely unproven, but still popular, theory about who/what the Merovingian is. (Some of it is based on content from the various video games, especially the online one, but I'll stick to just the movies for now.)

We know that one of the key aspects of the last two Matrixes (the one from the movie and the subsequent "rebooted" one) is that choice was explicitly programmed in. That was the only way to prevent the majority of humans from rejecting it, but necessitated the whole cycle of The One, etc. We also know that previous failed versions of the Matrix did not have such free will programmed into them. One was a paradise version and one a nightmare version where the machines had complete control over every aspect of the bluepills' lives.

The speculation is that the Merovingian was involved somehow in the construction of one of those early Matrices, specifically, the second. The only canon basis for this is:

The general idea is that the Merovingian is a holdover program from that second matrix, either responsible for its design, or more likely part of its operation system. (I've seen claims that this last bit was "confirmed" but cannot find any official confirmation of it.) The reason he is dangerous is because he does not hold to the belief that choice is even a real thing, thus he is a danger to both humans and the Matrix as a whole. He represents a danger to Neo specifically because he doesn't agree with the Architect's vision of the Matrix and the path of the One, which (supposedly) explains why he tries to keep Neo away from the Source. It also explains his extreme hatred for The Oracle, who is the agent of choice and free will in the Matrix and thus his polar opposite.

Besides that, he likes to collect literal monsters.

BTW: The theory that he is a former One is a misunderstanding of a line from Persepohone, where she tells Neo that the Merovingian "used to be like you"; its clear from plenty of other dialog that he is and always was a program, but that he had met all of the previous Ones, and thus was not one of them. She's speaking more abstractly, about his attitude (probably towards Trinity).

I get the feeling that something was lost, perhaps in the cutting room, with regards to this character. My feelings are he is dangerous due to his political web and connections. Not necessarily because of his hand to hand combat skills or anything. A part of his danger is his casual disregard for life and that he seems to be involved in the bondage scene (by some of the costumes in his club). I think this is meant to imply he enjoys torture and causing pain (I am not saying that this is how the scene is in real life).

He has a warped personality and the money and connections to reach you and carry out his intentions.

As with other characters in the Matrix, their purpose and personality have a close connection with their historical names. The Merovingians were ruthless French warlords of their Dynasty and this could be simply a reference to that. While seeming to play by his own rules, even willing to kill Neo and the others, his possession of highly skilled assassins, possession of a vast weapons cache and "house" whose foyer looks like a grand castle entrance, and doors that open to what could be the French alps, I think it more possible legal to be tying the character to history than any specific threat he poses.