I read this quite a while back, part of my parents library (they're in their 50s now)
I think the book was probably published in the 70s or 80s, my copy was paperback. I don't recall the cover art, but I have vague recollections of a satellite on the cover and maybe blue with grid-lines below it?

I've made concerted efforts to find it again but to no avail. My parents don't remember it either, but mum's an avowed book-aholic and buys a lot of books, reads them once and forgets about them, so that's not so surprising.

The key parts I remember:

This sounds like Star Fire by Ingo Swann published in 1978.

Your plot points match my recollection of the story. but I don't have access to a copy right now to confirm.

From memory Star Fire has

Parts of this remind me of Richard Doherty's Psychic Warrior series. There's the cold war, psychics who specialize in remote viewing, and some horrific descriptions of the psychic attacks. However, I don't have access to the book at the moment, so I can't confirm details further than what's in the Goodreads blurb.

In 1981 psychics were secretly gathered in a classified military facility to "remote-view" enemy targets. It didn't work. Project Grill Flame was disbanded. Or so the public was told. That was a lie. Renamed Bright Gate, today it is a top secret operation few know exists. Its objective is to produce a virtual soldier who can leave his body behind, go anywhere, and do anything by harnessing the power of the mind. It is now operational. But the Russians have done it first, unleashing on the world the ultimate virtual killer. He calls himself Chyort--"Devil." Drawing on a multitude of new abilities, this psychic assassin has gained access to a secret weapon capable of unleashing an unstoppable, undetectable nuclear arsenal. Only Sergeant Major Jimmy Dalton, a battle-hardened Ranger with nothing left to live for but his honor, can stop him by accepting a dangerous mission: Lead a team of Psychic Warriors...and stop the Devil for us all. 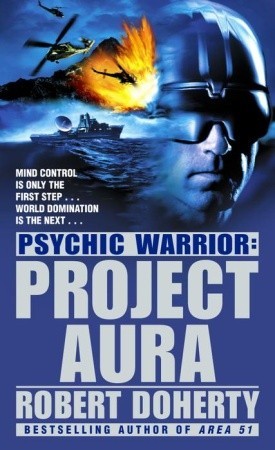 Bright Gate. HAARP. Remote Viewers. U.S. military operations so top secret that not even the president knew they existed. Now they have produced an elite group of commandos able to leave their bodies — and their souls — to fight anywhere, anytime, using the devastating power of the human mind.

Sergeant Major Jimmy Dalton is one of them. An ex-Green Beret, a man with no family, no ties, and nothing to lose, Dalton believes that the most dangerous weapon in any arsenal is the mind.

Among the first Psychic Warriors to be battle tested on the virtual plane, Dalton has seen up close the damage and destruction that the new weapons can cause. The memory will haunt him the rest of his days.

But for Dalton, for all of us, those days are numbered. A psychic cabal called the Priory is striking without warning, killing without mercy, aiming for world domination. And infiltrating the Psychic Warriors themselves....

Not the answer you're looking for? Browse other questions tagged story-identification books psychic cold-war or ask your own question.

11
Science fiction story revolving around telepathy
4
Telepath pretending to be in coma
12
Story where telekinesis is used to stop nuclear bombs
11
Identify an SF novel with references to trillium, telekinesis
12
Cold-war telepathic super-soldiers
3
A psychic science fiction book I read in the 80's an MIT rock star that sings to a flower and it sings back