What was this Ralph McQuarrie's concept art about?

Ralph McQuarrie was the leading concept artist of the original Star Wars trilogy. His artwork often reflected the evolution and changes in the story development of George Lucas' writing process. There is a number of concepts that never made to the final films but, in fact, were later recycled in books etc. and the TV series Star Wars Rebels.

Now, this piece of McQuarrie's art made me wonder... 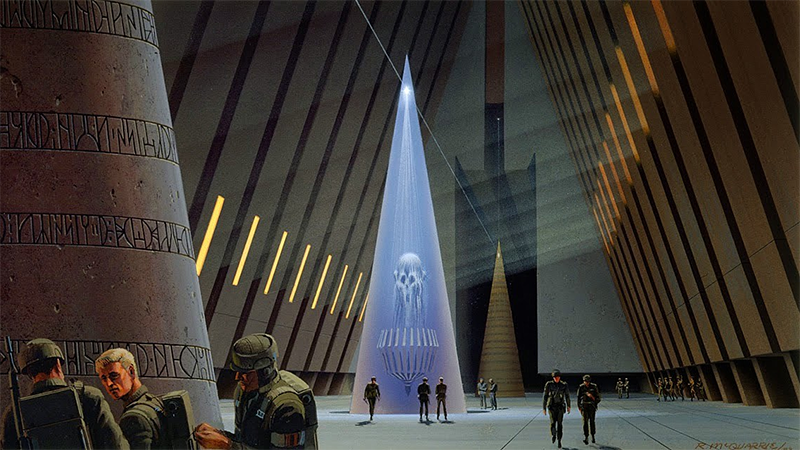 It is supposed to be an illustration of the Rebel base on Yavin 4. There are two stone cones on the edges of the hall, and they're connected with a beam that seems to come down from the ceiling. The beam forms yet another, a holographic cone between the others, and an ominous face within. To me, the figure somewhat resembles Edvard Munch's famous painting The Scream.

This concept was reused as an inspiration for Temple of the Blue Leaf Cluster in some novels and the online game Star Wars Galaxies. But what was the original meaning of the illustration when McQuarrie created it? Was there a reference to the such cones, the beam, and the figure in any of Lucas' early drafts of Star Wars?

It can be an hologram of "a planet (or even the DeathStar) with two people in front of it", like this :

4
Any official evidence that Rey is based on early “Star Wars” concept art?
2
Was this location built or mined out?
20
Was this Stormtrooper an idiot?
8
How was Ezra aware of this fact?
10
Was this actually this characters plan in the Last Jedi?
4
What is the meaning of “Han was Han about it”?
11
What do we know about the future of this character?
3
Is Zam Wesell inspired by early Ralp McQuarrie Concept Art of Han Solo & Starkiller Hero?
8
Why was this droid's “death” permanent?